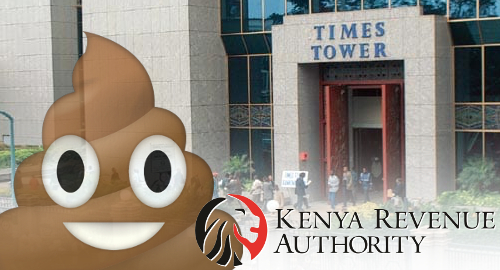 This weekend, a growing number of Kenyan sports bettors and football fans proposed a variety of outlandish forms of protest over the government-led shutdown of the operators and the cancellation of SportPesa’s sponsorships of the Kenyan Premier League and two of its most popular teams.

The disgruntled bettors and fans have suggested going down to the Kenya Revenue Authority’s (KRA) head office at Nairobi’s Times Towerand staging a mass defecation to show the taxman exactly how rank its campaign against the local betting industry has become. Another vowed to nail his genitals to the ground outside the KRA’s front door, although that seems akin to cutting off one’s, er, nose to spite one’s face.

The KRA continues to insist that the operators whose gaming licenses and payment processing channels were suspended owe the government hundreds of millions of dollars in taxes. Operators have gone to court to try to force the KRA to rescind its suspension orders but the court won’t render a verdict until September 19. In the meantime, SportPesa has had to put over 450 local staff on paid leave while it struggles to balance its books.

And Kenyan bettors are now raising holy hell after the few bookmakers still allowed to conduct operations – including Odibets, Betlion and Betika – caved to the KRA’s demands and began imposing the new 20% tax on customers’ winnings, which now applies not only to the actual winnings but also the betting stake.

Kenyan bettors could soon find themselves even more out of pocket, as the government is seeking to impose a new 10% tax on betting turnover, win or lose. The proposal was made in the 2019 budget statement, ostensibly as a means of reducing the “negative social effects” of betting.

Predictably, bettors have begun seeking out internationally licensed betting sites that (a) use PayPal to process transactions, and (b) aren’t demanding one-fifth of every wager, thereby depriving the KRA of any betting tax revenue whatsoever.

There have been a few signs that the KRA is feeling the public pressure, as it announced last week that it had renewed the license of Mozzart Bet, one of the 27 firms whose licenses were suspended on July 1. The renewal means the restoration of Mozzart Bet’s online Paybill number, but it remains to be seen whether punters will find it worth their while to patronize an operator that offers such poor value compared to the many international options available.