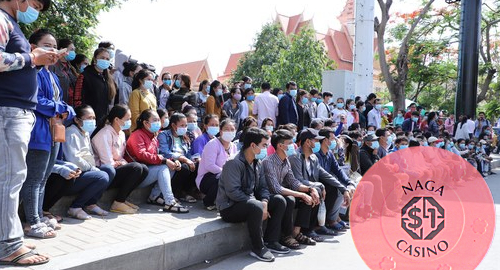 Cambodia’s largest casino operator NagaCorp is once again suffering labor unrest after it halted COVID-19 suspension payments to staff at its flagship property in Phnom Penh.

On Tuesday, Cambodian media reported that some 200 employees of the NagaWorld casino were demonstrating in front of the Labor Ministry building to protest a decision by NagaCorp to halt the partial salary payments the company had been making since all Cambodian casinos were ordered to close on April 1 due to COVID-19.

When Cambodia’s Prime Minister Hun Sen issued his casino closure order, he said casino owners “should find a solution for their workers during the suspension of their businesses.” Initially, NagaCorp agreed to pay most staff 50% of their salaries, while a handful of staff are still on full-time running NagaWorld’s hotel, which remains partially operational.

Those 50% payments were halted this month, leaving most NagaWorld staff with no income whatsoever. The gathering outside the Labor Ministry – accompanied by thousands of thumbprint petitions from other affected staff – was a bid to convince the government to pay idle casino staff that same $40 monthly handout that workers in the garment and tourism sectors are currently receiving.

Chhim Sithar, who represents NagaWorld’s unionized staff, told local media that the union had presented NagaCorp with three options for keeping its staff from economic ruin during the shutdown. One involves paying workers 30% of their wages and loaning them another 20% from future salaries.

Another would allow staff to borrow $300 per month from NagaCorp until normal work resumes, while a third option would allow workers to borrow the value of their salaries for 15 paid holidays (which are paid at a rate of 300% of normal daily pay). Sithar said staff would repay the lent sums through 10% deductions from their normal salaries once NagaWorld reopens.

NagaCorp has yet to publicly respond to these overtures, and the company hasn’t blinked in previous labor showdowns. NagaWorld’s unionized staff went on strike for better pay last September, prompting NagaCorp to secure an injunction declaring the strike illegal, after which the staff returned to work without any salary bump.

NagaCorp booked a record profit of $521m last year thanks mainly to ongoing expansion of its flagship Phnom Penh resort, which has critics claiming the company could do more to help staff. But the company is embarking on its largest expansion to date with Naga3, which carries a whopping $3.5b pricetag, leaving investors in full ‘let staff eat cake’ mode.