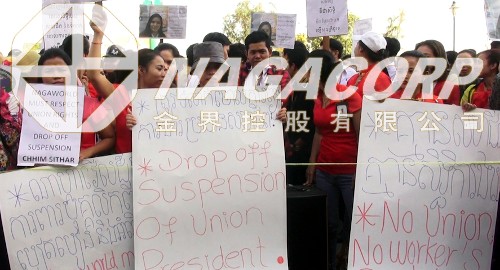 Cambodian casino operator NagaCorp is refuting reports that it has agreed to pay higher wages to workers at its flagship NagaWorld property in Phnom Penh.

On Saturday, Reuters reported that NagaCorp had reached a negotiated settlement with the unionized workers who walked off the job last week in pursuit of higher wages, better working conditions and the reinstatement of their suspended union president. The report quoted a union activist saying the company had agreed to pay hikes of between 18% and 30%.

However, NagaCorp issued a statement on Tuesday (local time) saying “all the employees who participated in the illegal strike have returned to work on 12 January 2020 without any wage increases.” The statement went on to say that it had been business as usual during the strike and that the company expects “no negative impact” on its business operations and financial performance.

Quite why NagaCorp initially appeared to have given in to the strikers’ demands was unclear, given that the company had just won a court injunction that declared the strike action was illegal. At the time, NagaCorp warned staff that anyone who participated in the strike from that point forward was “committing a grave offence.”

There were also significant discrepancies in the estimates of the number of striking workers. While media reports cited a figure of around 3,000 employees who’d walked off the job, NagaCorp claimed that there were only between 500-700 staff participating in the so-called “illegal gathering.”

NagaCorp says around 8,200 staff work at NagaWorld, which holds a monopoly on casino operations within a 200km radius of the capital. The company said it had also recently hired an additional 1,000 trainees to provide “additional labor capital.”

Reuters had reported that NagaCorp had agreed to reinstate Chhim Sithar, the president of the workers union, who was suspended with pay by NagaCorp last September for “an alleged breach” of NagaCorp’s rules and regulations. NagaCorp’s most recent message made no mention of Sithar’s status.