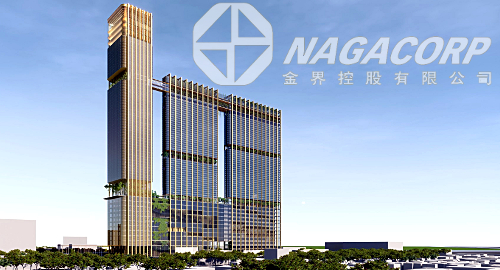 Casino operator NagaCorp is offering the world an updated view of the proposed mega-expansion of its flagship Cambodian property, while furloughed staff angle for pay rises once play resumes.

This week, the Chicago-based architecture firm of Skidmore, Owings & Merrill (SOM) unveiled new images of Naga 3, NagaCorp’s proposed $3.5b expansion of its flagship NagaWorld casino in Phnom Penh. The plans, first announced one year ago last month, have undergone significant revision since then, including a reduction from five hotel towers to three.

However, SOM emphasized that one of the three remaining towers will be “a commanding emblem in the skyline, and the highest point” in the city. As a result, Naga3 “will be the most important landmark for the city in the years to come,” especially given NagaCorp recently extended its Phnom Penh casino monopoly until 2046.

NagaWorld is currently closed, along with most other Phnom Penh businesses, on the order of Cambodia’s Prime Minister Hun Sen to minimize further transmission of the COVID-19 coronavirus. While between 20-30% of staff — mostly hotel and security — have been deemed essential and continue to show up for work, thousands of other Naga employees stand idle and worrying about their ability to survive depending on how long the casino remains shuttered.

Both unionized and non-union NagaWorld staff are currently receiving half of their usual salaries, and some are better able than others to survive on these partial wages. The Southeast Asia Globe recently quoted Chhim Sithar, head of the Naga employees’ union, saying “employers and government have responsibilities to support workers during this crisis.”

Sithar, a NagaWorld casino dealer, was suspended last September after fighting with the company over staff pay rises. That led to a strike by around 3k of the property’s unionized workers. NagaCorp ultimately won an injunction calling the strike illegal, after which the striking staff returned to work along with Sithar but without any rise in pay.

The Globe reported that negotiations between the company and its workers were ongoing, with the union proposing that staff receive 100% of their April salary, 70% for May and 50% in June if the closure order isn’t lifted by then. In exchange, staff would agree to work through public holidays.

Even if a deal is reached, Sithar expressed concern that “union-busting might happen,” in which NagaCorp might not allow “active union members” to come back to work once the casino resumes operations.

Sithar’s union is also seeking greater protections for dealers from losing gamblers who seek to take out their frustrations on the person who dealt them the cards. Sithar said gamblers had thrown hot beverages at dealers to express their dissatisfaction, while others “who are police, or work in government, they even threaten the dealers that they will kill them outside if they see them.”