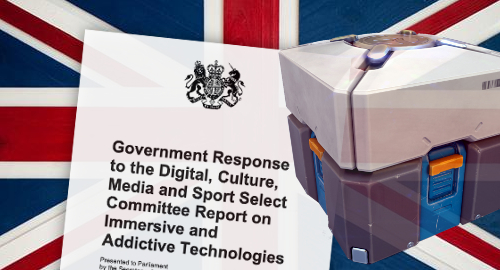 oot boxes in online video games could be classified as gambling products depending on the results of a new UK government impact study.

On Monday, the Department for Digital, Culture, Media and Sport (DCMS), the branch of the government which oversees gambling activity, announced plans to launch a call for evidence into “the impact of loot boxes on in-game spending and gambling-like behavior.”

The DCMS said it was prompted to act by its Select Committee’s report on Immersive and Addictive Technologies, which recommended that the government introduce regulations “to specify that loot boxes are a game of chance.”

The Committee also recommended that loot boxes containing an element of chance “should not be sold to children playing games” and games that contain such boxes should be labeled as gambling products with corresponding age limits. The Committee also urged the DCMS to establish a framework for ‘duty of care practices’ for eSports.

The DCMS said its call for evidence would “examine links to gambling-like behavior and excessive spending in games.” The findings “will be considered alongside a review of the Gambling Act.” The DCMS also intends to “set a framework for a program of research” into the impact of videogames on youth behavior.

The DCMS announcement isn’t a major surprise, given that the Conservative party announced last November that they would conduct a post-election review of the 2005 Gambling Act, with “a particular focus on tackling issues around loot boxes and credit card misuse.” The credit card gambling ban took effect this April, leaving only loot boxes on the Tories’ to-do list.

Game developers and publishers were typically slow to realize the severity of the situation they were facing, which ultimately convinced some governments to ban the products entirely. Companies eventually realized that the lucrative party was coming to an end, and only some face-saving responses would stave off an even tougher crackdown.