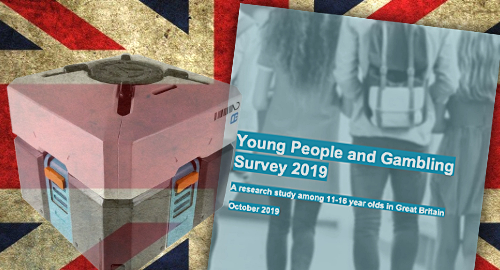 Gambling participation by UK youths has fallen 3% over the past year and that rate could keep falling if regulators take a tighter stance on video game loot boxes.

Among the survey’s headline findings are that around 11% of respondents admitted spending their own money on some form of gambling in the seven days before filling out the survey. That’s down from 14% in the 2018 survey and less than half the 23% participation in the 2011 report. Similarly, 36% reported gambling in the past 12 months compared to 39% in 2018.

WHO’S DOING WHAT WITH WHOM
The average amount of money spent by those who gambled was £17, up £1 from 2018, although 49% of those who gambled reported spending less than £5. As with previous reports, the youths weren’t asked about any gambling winnings, and thus the ‘spending’ figure doesn’t necessarily equal gambling losses.

The most popular form of youth gambling was private bets with friends (5%), with fruit/slot machines ranked second with 4%. Online gambling (including the National Lottery) ranked third with 3%, up from just 1% in 2018, but the UKGC noted that the 2019 survey was the first to be conducted entirely online, and thus “all comparisons made over time should be interpreted with caution.”

Other figures cited in the report offer further evidence for not taking these surveys too seriously, as 3% of youths reported using their own money to ‘personally’ place a bet at a high street betting shop, while another 2% claim to have personally gambled inside a casino. Unless two kids were doing that old trick where one stands on the other’s shoulders underneath a trenchcoat, this isn’t reality.

Online gambling participation over the past 12 months was 6%, unchanged from 2019, and more than twice as many of those who did gamble online did so with their parents’ permission using their parents’ online accounts. So once again we offer our annual hurrah to bad parenting.

GAMBLING, BOOZE AND SMOKES
The 11% gambling participation rate over the previous seven days was below the 16% of youths who claim to have tasted alcohol during that period, but higher than those who vaped (7%), smoked cigarettes (6%) or took illegal drugs (5%).

LOOT BOXES A GAMBLING GATEWAY?
The UKGC report came hot on the heels of a different report detailing kids’ exposure to videogame ‘loot boxes’ and the need for legislators to restrict access in the same manner as actual gambling products.

The UKGC’s youth report showed 52% of respondents were aware of in-game items and of this group, 44% had paid money to open loot boxes. Around 6% have used in-game items for betting, either with third-party websites set up for that purpose or privately with friends.

The UKGC survey added a new question for 2019, in which those who’d both used in-game items and spent money gambling were asked which of these two came first. Around one-third (34%) said they’d used in-game items first, then gambled, while 11% said they’d gambled before using in-game items. UK parliamentarians continue to insist that loot boxes aren’t gambling, but this finding strongly suggests that the regulatory hammer is about to meet the anvil.