Home / Business / UK youth gambling on the rise, mostly due to survey changes 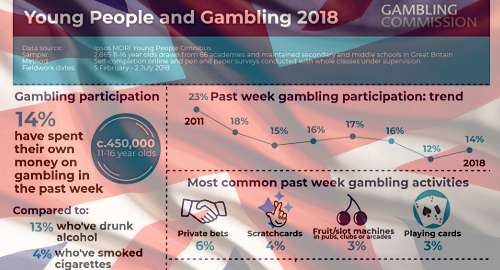 A new report claims UK children are gambling more than they used to, but the report’s findings aren’t nearly as alarming as anti-gambling campaigners would have you believe.

On Wednesday, the UK Gambling Commission (UKGC) issued its Young People and Gambling 2018 Report, which found that 14% of youths aged 11-16 years – around 450k individuals – spent their own money on a gambling activity in the week prior to their participation in the survey.

While this percentage is two points higher than a similar survey in 2017, the UKGC noted that the 2018 number is “relatively low by historical standards.” The 2011 report found 23% youth gambling participation and the 2018 figure is below all previous years except 2017.

Similarly, while 1.7% of youths surveyed were deemed to be problem gamblers (up from 0.9% in 2017) and 2.2% ‘at risk’ of developing gambling problems (up from 1.3%), the UKGC cautioned that a larger number of respondents qualified for the screening questions this year, which enabled it to identify problem gamblers “more accurately than before.”

However, the survey notes that its definition of spending doesn’t automatically equate to losses, as the UKGC left the decision of whether to consider potential winnings to the individual respondent’s interpretation.

The UKGC addressed the fruit machine issue last week in a separate report, which found that nearly 90% of UK pubs/clubs were failing to prevent children from accessing the machines. The machines permit a maximum stake of only £1, but the UKGC issued a warning to the pub/club trade association that future tests needed to show improvements in the “uniformly poor’ results.

As for lottery scratch cards, the youth gambling report was issued the same day that National Lottery operator Camelot was spanked by the Advertising Standards Authority for placing a scratch card promotional poster outside the entrance of a school. Laws prevent such ads from being positioned within 100 meters of a school, and Camelot blamed its failure on a faulty postcode database.

ONLINE PARTICIPATION REMAINS LOW
As for the online stats, the number of youths who reported gambling using their parents’ or guardians’ accounts in the past 12 months fell one point to 6%, and this figure fell to 3% — two-thirds of which did so with their parents’ permission – when you exclude the National Lottery website.

Youth participation in free-play social casino gaming sites over the past year was similarly low (4%). The majority of social gamers played via a standalone app (39%), followed by social networking apps (18%) and sites (15%). Smaller percentages played demo games on gambling apps (13%) and gambling websites (9%).

In terms of video games, 31% of youths copped to paying money or using in-game items to open loot boxes, while just 3% said they’d made ‘skin bets’ with virtual goods on websites outside the games.

The UKGC has dramatically increased its oversight of the gambling industry over the past year, and its consumer protection mantra has put particular emphasis on protecting children from gambling harm. But, at least as the online stats indicate, parents and guardians have an equal if not more important role to play in ensuring their kids aren’t prematurely exposed to gambling issues.