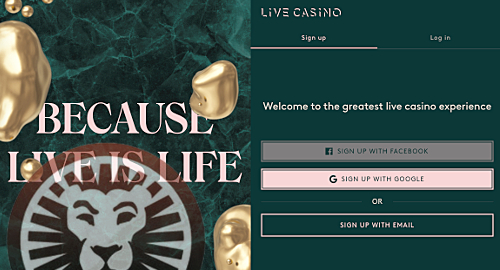 LiveCasino’s offering includes products from live dealer specialists Evoltuion Gaming as well as other games from providers NetEnt, Microgaming and others. The site was developed by the company’s “multi-brand unit” Brands of Leo and will be run by the team responsible for GoGo Casino.

LeoVegas CEO Gustaf Hagman said LiveCasino was debuting in “a number of English-speaking countries” and launches in other locally licensed markets would follow. The site allows players to sign up via their Facebook or Google accounts, “a unique and innovate way to log in and register” that Hagman characterized as “an industry first.”

LeoVegas is set to undergo some changes at the top after nominating Per Norman to be the company’s next chairman and losing two directors (Mårten Forste and Tuva Palm) who declined re-election. Last week, another board member called it quits as co-founder Robin Ramm-Ericson indicated his intention to decline re-election.

Ramm-Ericson said that after nine years on the board he felt “it is now time for me to take the next step.” Calling LeoVegas “an amazing company and team,” Ramm-Ericson said he would remain an “engaged owner in supporting the company on its continued journey.”

LeoVegas will hold its annual general meeting on Friday (8), two days after the release of the interim report on its Q1 financial performance. In addition to Norman, the nomination committee has proposed four other candidates as new directors: Hélène Westholm, Mathias Hallberg, Carl Larsson and Torsten Söderberg.

The Stockholm-listed LeoVegas prides itself on being the number one online casino operator in its native Sweden but Hagman was one of the CEO signatories to the public letter issued last week by a number of Swedish-licensed operators to Social Security Minister Ardalan Shekarabi.

The CEOs warned Shekarabi that Sweden’s increasingly restrictive regulatory tinkering was sabotaging the government’s aim of ‘channeling’ players to locally-licensed sites. The CEOs further warned that the changes were causing players to seek out internationally licensed alternatives, and “if players leave, the companies follow suit.” Shekarabi has yet to publicly comment on the letter.