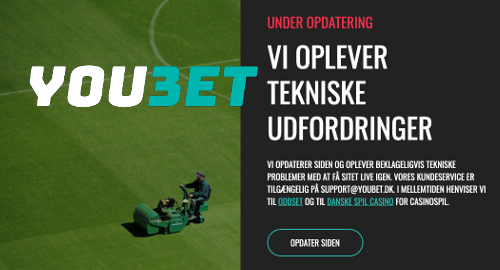 This weekend saw the SBTech-powered YouBet site go offline after it continued to offer betting markets on Swedish amateur football despite Danske Spil pulling similar markets from its main Oddset betting platform. Danske Spil claims that the mix-up was the result of “a mistake of our supplier” and the company “shut down the matches as soon as we discovered the error.”

Danske Spil had pulled the matches from Oddset after coming under heavy criticism for offering wagers on what essentially amounts to a beer league. Last week, a match between two seventh-tier Swedish squads was cancelled after players reported receiving calls from bettors all over the world either encouraging them or trying to put them off their game.

Niels Folmann, director of Danske Spil’s sports betting unit, originally told local media that the company was simply offering “what is available from the world of football right now.” The COVID-19 pandemic has called a halt to virtually all major football leagues, with Belarus being a notable (and notorious) exception.

Denmark’s Spillemyndigheden gambling regulatory agency recently issued a notice to gamblers warning of the potential downsides of “playing new types of games” in the absence of their normal betting activity.

Danske Spil was among the bookmakers who took wagers on the so-called ‘ghost’ matches in the Ukraine last week. Folmann told local media that those matches “slipped into our platforms because our supply is currently limited.” Danske Spil ultimately refunded losing bets on those Ukrainian matches while allowing luckier punters to keep their winnings.

SBTech, which went live with YouBet two years ago, recently suffered a public black eye after its clients around the world were knocked offline by an unspecified cyberattack. The affected sites have since come back online although the source of the digital incursion remains a mystery.

SVENSKA SPEL DEMANDS BAN ON AMATEUR MATCH BETS
Across the border in Sweden, state-owned betting operator Svenska Spel threw down the integrity gauntlet on Tuesday, with CEO Patrik Hofbauer and chairman Erik Strand calling on their government to ban wagering on amateur sports.

The pair noted that Svenska Spel’s betting division – which also operates on a SBTech platform – is equally suffering from the mass cancellation of sports, “but jeopardizing the safety of sports by offering games that are rogue is never an option for gaming companies.”