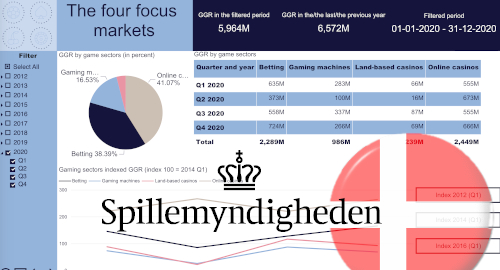 Sports betting reclaimed its role as Denmark’s top revenue vertical in the final quarter of 2020, despite online casino apparently having the devil in its corner.

Figures released Wednesday by Denmark’s Spillemyndigheden regulatory agency show locally licensed gambling operators generated revenue of DKK1.72b (US$281.2m) in the three months ending December 30, up 6.6% from the final quarter of 2019 and 12.5% better than the market reported in Q3 2020.

Sports betting led Q4’s charge with DKK724m, up 16.6% year-on-year and a damn sight better than the DKK558m reported in Q3 2020. In fact, Q4 was betting’s best quarter last year, which otherwise suffered from pandemic-related shutdowns that began in the latter part of Q1.

Online casino revenue ranked second with a devilish return of DKK666m, up 16.2% year-on-year and a slightly higher sequential gain from Q3. But Q4’s total was slightly below the DKK673m peak in Q2, when the absence of major sports pushed Danes to explore other gaming verticals. Slots claimed a nearly three-quarter slice of Q4’s casino pie.

Denmark’s land-based gaming verticals weren’t nearly as fortunate in Q4, as the nation headed into its second pandemic lockdown in November. Gaming machines in slots halls saw revenue fall more than one-fifth year-on-year to DKK266m, better than the DKK100m low-water mark reported in Q2, but still.

For 2020 as a whole, sports betting revenue totaled DKK2.29b, down 8.5% from 2019 and the vertical’s first annual revenue reversal since the regulated market’s 2012 launch. Despite the sports disruptions, online casino revenue rose only 5% to DKK2.45b, well below 2019’s 8.1% year-on-year improvement and the lowest annual gain since 2012.