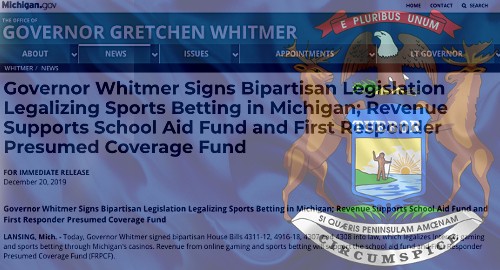 On Friday, Gov. Gretchen Whitmer put her Jane Hancock on the gambling expansion legislation the state’s elected representatives approved earlier this month. The bills allow the state’s commercial and tribal casino operators to offer both online and land-based sports betting, as well as online casino and poker products.

While Whitmer had previously signalled her willingness to sign the legislation, the state’s gamblers remember all too well the last-minute veto imposed on December 28, 2018 by former Gov. Rick Snyder, who waited until legislators had gone home for the holidays before rejecting the online gambling bills that legislators had approved earlier that month. But Whitmer ensured there’d be no governor grinchiness this year.

In a statement released Friday, Whitmer called the gambling expansion bills “a real bipartisan win for our state.” Whitmer added that her “top priority in signing this legislation was protecting and investing in the School Aid fund.”

Whitmer negotiated hard with Rep. Brandt Iden, one of the bills’ chief architects, insisting on higher taxes for new gambling products to ensure the state’s online lottery operations – a major contributor to education funding – didn’t suffer from additional competition. Iden managed to convince the state’s casino operators that getting a slightly smaller slice of the pie was infinitely better than no pie at all.

The final tax rates were set at 8.4% for sports betting while online casino and poker revenue will be taxed at a tiered rate starting at 20% for annual revenue under $4m and topping out at 28% for revenue over $12m. Detroit’s three commercial casinos will pay an additional 3.25% on both their betting and online gambling revenue to address municipal demands.

With Whitmer’s signature affixed, the focus now turns to how soon Michigan can launch its new products. Sports betting appears to be the easier lift, although hopes of a thriving sportsbook market by March Madness could prove overly optimistic, particularly if the US federal government insists on approving tribal operators’ gambling expansion.

Michigan becomes the 20th US state to have authorized some form of legal sports betting, while only the sixth state to have legalized online casino or poker products. West Virginia, the last state to approve online casino and poker, has yet to launch either over six months after legislators approved the activity.