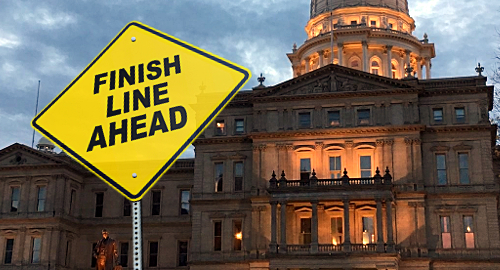 Michigan’s online gamblers and sports bettors are bracing for their Best Christmas Ever as state legislators appear determined not to screw up legalization this time around.

On Tuesday, the Michigan Senate Regulatory Reform Committee approved the state’s online gambling (casino/poker) and sports betting legislation, setting up votes on the senate floor – possibly as early as Wednesday (11) – followed by concurrence votes in the House of Representatives. Both bills are expected to pass without much opposition.

Michigan’s online gamblers have seen this movie before, only to have their hopes cruelly dashed last December when then-Gov. Rick Snyder vetoed the measure at the last minute. However, current Gov. Gretchen Whitmer has reportedly signalled her intention to sign both bills should they arrive on her desk.

Whitmer previously showed little enthusiasm for online casino gambling, pushing for excessively high tax rates to ensure the new options wouldn’t eat into the Michigan Lottery’s online games. State Rep. Brandt Iden, one of the prime movers behind Michigan’s gambling expansion efforts, appears to have worked out a formula that all parties can live with.

Under the amended version approved by the committee on Tuesday, online gambling operators would pay a tiered tax rate starting at 20% for annual revenue under $4m. The rate rises to 22% for revenue between $4m and $8m, increasing in 2% increments until topping out at 28% on revenue above $12m.

Previous versions of Iden’s bill envisioned a rate starting at 12% and topping out at 23% but the state’s tribal casinos and the three commercial operators in Detroit apparently found the change acceptable enough not to mount any serious objections to progress. (The commercial operators will pay an additional 3.25% tax to Detroit’s municipal government.)

The casinos did manage to wrangle a temporary window in which they will be allowed to deduct some of their free-play promotional giveaways to customers when they calculate their gross revenue. These deductions can’t exceed 10% of revenue in the first three years, falling to 6% in year four and to 4% in year five. After that, bupkis.

The casinos also caught a small break on their sports betting tax rate, which was reduced from 8.75% to 8.4%. (Again, Detroit casinos will pay an additional 3.25%.) The betting legislation retains its controversial requirement for all sportsbooks to use league-supplied data for in-play wagering purposes, provided the leagues make this data available on ‘commercially reasonable terms.’

The state will adopt a standard fee structure for both online gambling and sports betting licenses: $50k for the application, an initial fee of $100k and annual renewals available for $50k.

As for any fears that Whitmer may be setting Iden up for a fall, her spokesperson Tiffany Brown said Tuesday that Whitmer viewed the current legislative drafts as “a good, bipartisan solution” and the governor was looking forward to “closely reviewing this package once it hits her desk.”

Michigan legislators did approve one gambling bill on Tuesday, approving a measure to lift the prohibition on individuals with ties to Detroit casinos donating to political causes. Priorities, people.