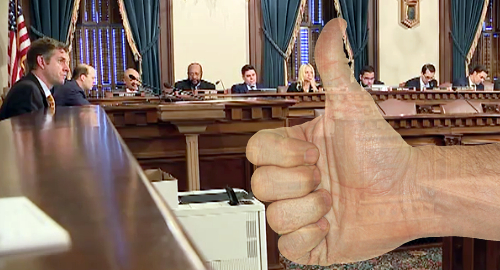 Michigan’s online gambling and sports betting bills took yet another tentative step toward passage after clearing a state legislative committee.

On Tuesday, Michigan’s House of Representatives’ Ways and Means Committee approved Rep. Brandt Iden’s online casino and sports betting bills by separate votes of 10-1 each. The bills will now proceed to the floor of the House later this week for further debate and a possible vote.

Iden, who chairs the Committee, originally proposed passing the online and betting bills as a single piece of legislation but ‘uncoupled’ the two in September based on his belief that the betting component would meet less resistance as a standalone bill. Iden also tinkered with the bill’s tax language in the hopes of getting more legislators on board.

The betting bill okayed by the Committee would charge tribal casinos 8.75% tax on their betting revenue, while Detroit’s three casinos would pay 12% (counting their 3.25% kickback to the city government).

Controversially, Iden has added a requirement for Michigan-licensed bookmakers to use official league-supplied data, albeit with a caveat that this data must be supplied at “commercially reasonable terms.” These terms can include the quality of said data as well as ensuring that data is available from more than one authorized source.

To date, only Tennessee and Illinois have approved betting legislation that requires the use of league-supplied data. Iden, already herding cats thanks to the state’s mix of commercial and tribal casino operators, apparently felt the need to throw the leagues a bone to get them on board.

Iden told local media that while he’d welcome the tax revenue from betting, the real money for the state would come from taxing online gambling, as New Jersey’s thriving iGaming market has amply indicated. “Sports alone, it’s going to be much smaller.”

The online casino/poker bill features a complex progressive revenue tax that, for the first three years of operation, starts at 4% for operators who generate under $4m in annual revenue, topping out at 19% for revenue over $12m. The rates go up in year four and again in year five, maxing out at 8% for the online minnows and 23% for the whales. (Detroit’s casinos will have to pay the aforementioned 3.25% city tax on top of these rates.)

Michigan’s budget office has claimed that Iden’s gambling expansion plans would transfer gamblers’ affections from higher-taxed products such as the Michigan Lottery – which already operates online – and brick-and-mortar casinos, leading to a $28m annual reduction in the sum those operations kick back to public schools.

Iden rejects the idea that the state will suffer any shortfall, but he has yet to convince Gov. Gretchen Whitmer, who has previously indicated that she won’t support any gambling bills that don’t carry far more punitive tax rates than what Iden is proposing.

Iden has been down this road before, having successfully steered an online gambling bill through the legislature only to have outgoing Gov. Rick Snyder veto the measure after legislators had gone home for Christmas. Iden said Tuesday that he was “not looking for another veto” and that, as a gambling man, he would bet that Whitmer wouldn’t make good on her veto threat.