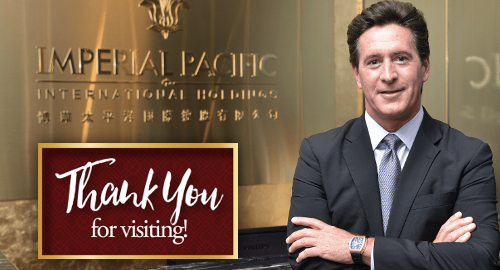 Deleon Guerrero said he wasn’t at liberty to disclose the reason behind Brown’s resignation. Last month, Brown was a no-show at the CCC’s monthly meeting, leading CCC chair Juan Sablan to grumble that the CCC might “need to subpoena” Brown to ensure his attendance.

Brown was IPI’s original CEO but shed the mantle in early 2017 to become IPI’s chairman. One year later, Brown left the company entirely to “pursue other projects close to his family” on the US mainland, only to return in late 2018 as interim chairman and eventually resume the CEO role as well.

Brown isn’t the only senior IPI figure who’s recently announced his departure. Last week, IPI’s general counsel Philip Tydingco announced that December 13th would be his last day on the job. This week, local media announced that Tyndigco’s role would be filled by Joey Patrick San Nicolas, who served as CNMI attorney general from 2012 to 2014.

In addition to its legal woes, IPI continues to struggle to complete its Imperial Palace Resort amid perpetual labor shortages and conflicts with the workers it does have. The financially struggling operator has also been accused of shortchanging the CNMI government by unilaterally claiming ‘credits’ that exceeded what little tax IPI’s license obligates it to remit.