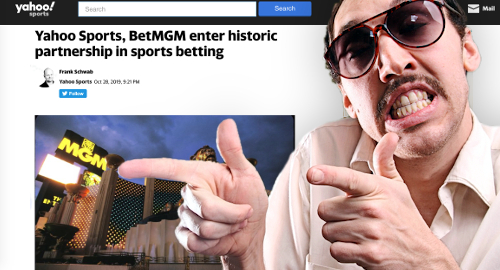 Early Tuesday morning, Verizon Media announced that it had struck a multi-year, exclusive partnership to integrate the BetMGM sports betting product into its Yahoo Sports app starting in November. Access will be rolled out across other Yahoo platforms at a later date.

Terms of the deal weren’t disclosed and the official release offered scant details on specifics, other than to say that Yahoo will serve as an ‘official Digital Media Sports Partner’ of MGM Resorts.

Sports Business Daily quoted Verizon CEO Guru Gowrappan saying Yahoo’s role would effectively be that of an affiliate, steering traffic to BetMGM, which will handle all wagering transactions. Neither party has confirmed how this deal will work, i.e. whether Yahoo will share in any betting revenue generated via its 60m monthly users or collect on a cost-per-acquisition basis.

However it works, this wagering will only be available in states where (a) such activity is legal, and (b) where BetMGM is active, which currently is limited to Nevada and New Jersey. Yahoo users in other states will instead be steered to free-to-play products or other fantasy-style content.

MGM and Yahoo have also pledged to collaborate on content and other marketing efforts, including Yahoo hosting “multiple player events” at MGM properties.

The official release featured glowing quotes from the commissioners of the National Basketball Association and National Hockey League, with which MGM has established official gaming partnerships, regarding how the Yahoo-BetMGM tandem will make sports fans curse every day they existed before this deal was struck.

GVC and MGM unveiled their US-facing Roar Digital JV last year, with plans to launch sports betting and online casino operations in all states where such activity was permissible. But the BetMGM product is currently getting its clock cleaned by its New Jersey rivals and the hope is that access to Yahoo customers might help goose those returns.

Yahoo’s previous foray into pseudo-betting aka daily fantasy sports failed to offer much of a challenge to the industry’s heavyweights. The company also shuttered its Yahoo Games unit in 2016 due to user levels falling to unsustainable levels.

The Yahoo-BetMGM tie-up is the latest sports betting partnership involving North American media, following the Fox Bet JV of The Stars Group and Fox Sports, as well as theScore’s launch of its own sportsbook app.