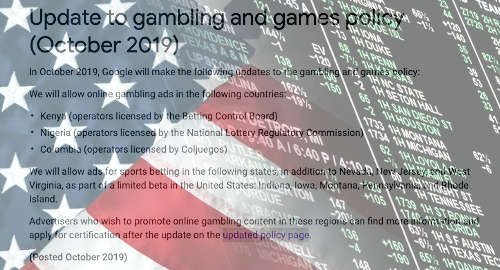 Technology colossus Google’s gambling advertising policies have been updated to permit gambling promos in additional US states as well as several international markets.

On Tuesday, Google updated its ‘gambling and games policy’ to allow sports betting ads in the US states of Indiana, Iowa, Montana, Pennsylvania and Rhode Island. Those states join Nevada, New Jersey and West Virginia in the ‘limited beta’ program that Google launched in June to address the spread of legal wagering following last year’s US Supreme Court ruling.

Operators approved to offer betting in the above states will be permitted to engage in promotional activity via Google Ads, Google Display Network, YouTube and AdMob but not through Google Ad Manager. Would-be advertisers must also ensure that they don’t promote other products such as online casino games or target underage bettors.

Google has been steadily relenting on its former anti-gambling policies. In mid-2017, the company began allowing real-money gambling apps into its Google Play marketplace, albeit only in a handful of countries. This August, Google finally permitted daily fantasy sports advertising in US states where operators were licensed to conduct such activity.

Kenya’s position on this list runs counter to its government’s current negative attitude toward anything to do with gambling, as the ruling party has been attempting to pass very strict regulations that would severely limit gambling operators’ ability to promote their products, including a total ban on social media marketing.

Gambling operators’ use of Google services remains dotted with pitfalls, as UK-licensed online casino operator Casumo discovered earlier this month. The UK’s ad watchdog took Casumo to its regulatory doghouse after the company’s ads appeared in Google searches for “how to unsubscribe from all gambling.”