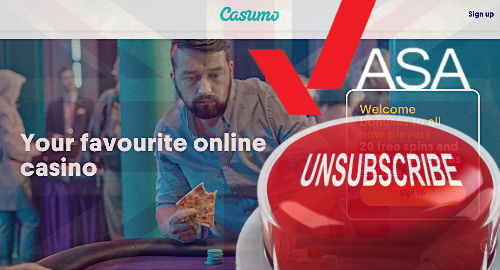 Online gambling operator Casumo is wearing digital egg on its face after its ads popped up in a Google search for problem gambling assistance.

On Tuesday, the UK’s Advertising Standards Authority (ASA) upheld a complaint against Casumo, which was brought by an individual who entered “how to unsubscribe from all gambling” into Google’s search engine in May and was greeted with an ad touting Casumo’s online casino bonus offers. The complainant felt the ad was irresponsibly targeted.

In its response, Casumo Services Ltd said it associated the word ‘unsubscribe’ with being removed from a mailing list or opting out of marketing pitches and so they didn’t consider that they had targeted their paid Google ad in an irresponsible manner.

Casumo said it hadn’t anticipated that a gambler might use the word ‘unsubscribe’ to refer to a self-exclusion program. As a result, ‘unsubscribe’ was not on the list Casumo submitted to Google to ensure their ads didn’t appear when a user searched for certain words or phrases.

Casumo pleaded that the dynamic nature of Google searches made it impossible for the company to anticipate every single variation and combination of words that might prove problematic. However, Casumo stressed that it had responded to the complaint by making that search term inactive and had also reviewed its wider list to ensure it was more robust.

The ASA gave Casumo credit for taking prompt action post-complaint to address where their ads were served. However, the ASA felt that “how to unsubscribe from all gambling” was pretty clearly a search for tools in combating problem gambling behavior and the non-broadcast CAP Code requires gambling marketing to pay particular attention to protecting vulnerable persons from being harmed or exploited.

Casumo was previously dragged to the ASA’s woodshed in September 2017 after one of its affiliate marketing partners ran a particularly galling advertorial that claimed a UK man had paid off his cancer-stricken wife’s £130k medical bills through a lucky slots spin. The same affiliate’s antics also brought shame upon 888 Holdings, Ladbrokes and Sky Betting & Gaming.