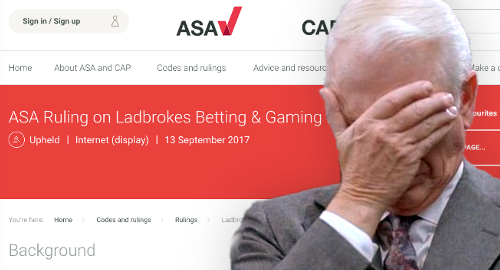 The four operators were slammed for the same piece of advertorial, which appeared on 24hournews.co and casinohacks.co between March and June of this year. The advertorial, which the complainants felt “had the appearance of an editorial article,” detailed the travails of a man named ‘William’ who was £130k in debt due to his wife’s cancer-related medical bills.

Lo and behold, while taking a break in the hospital lobby to update friends and family about his wife’s condition, an admittedly depressed ‘William’ stumbled across ads for various gambling websites on his mobile, but almost ignored the sites until he noticed their various promotional offers, which he felt were “too hard to pass up.”

Naturally, William went on to win “over 30 times his annual salary in a single spin” and “his debt and financial worries came to an abrupt end.” William went on to buy back the house he’d been forced to sell, pay off the medical bills and take his wife on a pricey honeymoon.

At the bottom of this rags-to-riches story was a ‘comments’ section in which ‘readers’ discussed similar gambling triumphs, alongside banner ads promoting the gambling operator in question.

The complainants took issue with the notion that the ads were pitching gambling as providing an escape from depression and as the solution to one’s financial problems. The ASA itself wasn’t sure the adverts were sufficiently identified as such and made clear their commercial intent.

Each operator responded to the complaints in pretty much the same way, claiming that the ads were created by the affiliate without the operators’ knowledge and had been removed once the operator found out. Furthermore, the operators terminated their agreements with the affiliate due to the ads having contravened the terms of their deal, and warnings had been issued to other affiliates not to make the same mistakes.

The ASA’s blanket response was that, while the advert had been produced by a third party, it was the operators’ products being promoted and their websites to which punters were being directed. As the beneficiaries of the advert, the ASA deemed the operators to be responsible for the “socially irresponsible” content.

The ASA also found that the small text in the banner indicating the story’s “advertorial” nature was insufficient to alert customers that what they were reading was fiction, especially since the body copy referred to “our own Daily News reporter” and was written in an editorial style that belied the copy’s commercial intent.

The ASA ordered each operator to ensure that the ad in question didn’t resurface and to ensure that future ads – regardless of who creates them – are “clearly identifiable as marketing communications” and are “prepared in a socially responsible way.”

Following the ASA’s publication of its verdicts, the red-faced operators have issued statements disavowing the affiliate’s attempt at ‘fake news’ while musing about getting a lot pickier regarding the affiliate company they keep.

The ASA’s verdicts arrived shortly after The Guardian ran a series of articles detailing shady affiliate behavior, which may or may not have contributed to Sky Betting & Gaming’s decision last week to scrap its UK-facing Affiliate Hub portal.

SB&G CEO Richard Flint is scheduled to appear on a social responsibility panel at next week’s Betting on Sports Conference, during which a discussion of the future of affiliates – assuming they have one in the UK market – will likely generate some intense debate.