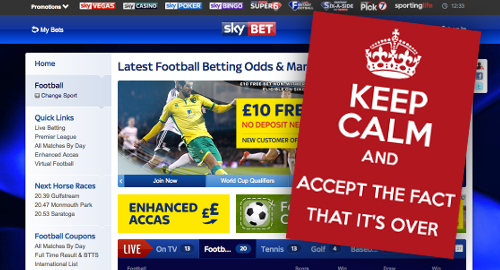 On Monday, SB&G’s UK-facing affiliates reported receiving communication from the company informing them that their services will no longer be required as of October 2. The company claimed the decision came following “a comprehensive strategic review” that focused on “changing regulatory requirements” in its home market. While the Affiliate Hub portal will cease to exist as of October 2, SB&G’s notice made no mention of any forthcoming changes to its Oddschecker and Sportinglife affiliate platforms.

The notice said UK online operators were “experiencing increased obligations regarding their regulatory responsibilities and level of compliance.” SB&G’s opinion is that its UK program “is no longer viable and managing the output of affiliates presents a significant risk to our business from a regulatory perspective.”

In June, the UK Gambling Commission (UKGC) announced that it had teamed with the Competition and Markets Authority (CMA) to investigate several online licensees for “potential breaches of consumer law,” including misleading promotions with excessive rollover requirements. An update on this investigation has been promised for October.

SB&G offered no indication how long its review had been underway, but the termination of its affiliate program came the week after the Guardian published articles detailing affiliates’ use of third-party data to target gamblers on the lower end of the socio-economic scale, and exposing how some affiliate touts deliberately push long-odds wagers on punters in order to ensure greater returns from their revenue-sharing deals with operators.

The UK’s anti-gambling media have also gotten a lot of mileage out of last month’s publication of new survey results indicating a rise in the ranks of the nation’s problem gamblers, although the overall figure remains at just 0.8% of the overall population.

The media was further emboldened by last week’s record £7.8m fine the UKGC slapped on online licensee 888 Holdings for its failures to prevent self-excluded gamblers from continuing to wager via the company’s online bingo site. And the entire industry is braced for this the release this autumn of the results of the government’s triennial review of the gambling industry, which is expected to recommend further curbs on industry activity.

The current climate will undoubtedly convince other UK operators to follow SB&G’s lead. Ladbrokes Coral, which was one the five bookies included in the UKGC/CMA probe, recently announced that it was keeping a tighter leash on its affiliates’ behavior to ensure their practices didn’t get the bookmaker in even more hot water.