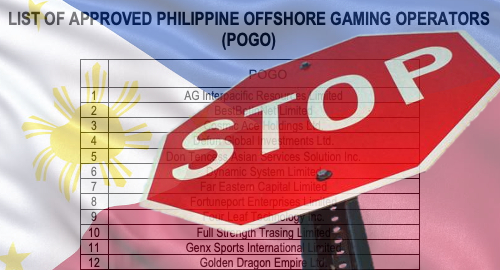 Philippine-based online gambling operators have new reason to fear that the government is weighing the possibility of shutting down the sector to placate China.

On Tuesday, Benjamin Diokno, chairman of the Philippine Anti-Money Laundering Council, announced that he’d tasked the body with studying the “financial stability impact” of the Philippine Offshore Gaming Operator (POGO) sector, and what might happen to the larger economy if the government decided to call time on its online gambling licensees.

Diokno, who is also governor of the nation’s central bank, said his primary focus was to learn the impact on real estate, the food industry and other non-gaming sectors of the economy if the POGOs “all of a sudden decide to pack up and leave.”

Diokno is being somewhat disingenuous, as the POGOs are far more likely to be asked to leave than to leave of their own accord. China has been pressing the Philippines to “ban all online gambling” due to the POGOs’ reliance on Chinese gambling customers and their need to import tens of thousands of Mandarin-speaking Chinese nationals to serve these customers’ needs.

On Wednesday, Philippine President Rodrigo Duterte will arrive in Beijing for several days of talks with China’s President Xi Jinping. While most of the talk is expected to center on territorial disputes in the South China Sea, POGOs and the safety of Chinese nationals working for POGOs in the Philippines will also be on the agenda.

The Philippine real estate sector has definitely enjoyed the rise of POGOs, whose operations currently account for over 1.1m square meters of leased office space, a five-fold increase since 2016. But some property firms have begun limiting their POGO exposure to ensure a softer landing in case the government pulls the plug.

The Philippine Amusement and Gaming Corporation (PAGCOR) announced a moratorium on new POGO applications earlier this month, although two pending applications were approved late last week. There are currently 60 POGO licensees, although only 48 of these are active.

ANTI-KIDNAPPING SQUAD CLAIMS PROGRESS
Among China’s other concerns regarding the Philippine gaming industry are the number of Chinese nationals being kidnapped by loan sharks after running up gambling debts at Manila casinos. The Philippine National Police Anti-Kidnapping Group (PNP-AKG) announced new “intensified operations” this month to deal with this problem.

This week, the PNP-AKG announced that some of its officers were being sent to foreign-language schools to learn Mandarin and Cantonese so that they could more effectively communicate with kidnapping victims as well as gather intelligence that could disrupt kidnappings before they occur. China’s government is reportedly assisting the PNP-AKG in this endeavor.

Tuesday also saw the PNP-AKG announce the arrests of four Chinese nationals accused of attempting to kidnap a Chinese gambler who’d borrowed a sum of money from them. The gambler was a POGO employee who went to a casino in Parañaque City on Saturday, but when the four loan sharks tried to drag him out of the casino, the gambler made a scene, attracting the attention of casino security, who then called the PNP-AKG.