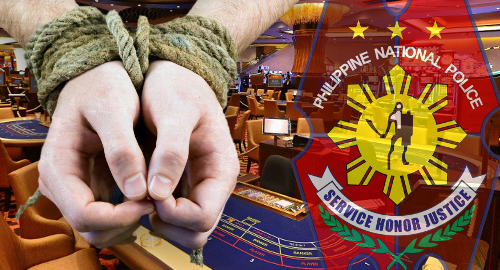 Philippine police have vowed to step up their crackdowns on casino kidnappings, just days after China expressed concern over the fate of its citizens in dealings with the local gaming industry.

On Wednesday, the Philippine National Police (PNP) Anti-Kidnapping Group (AKG) announced that it was conducting “intensified operations” to deal with the rising number of gaming-related kidnappings of foreign nationals, predominantly citizens of China who cannot gamble legally in their home country.

Since 2017, the PNP-AKG has recorded 52 instances of Chinese nationals being held against their will in the Philippines after borrowing money to gamble from loan sharks – most of whom are also Chinese nationals – and then being unable to repay.

Philippine media has been awash with such reports in recent years following the dramatic expansion of the country’s casino industry. Just this month, the AKG announced the arrest of five Chinese nationals who kidnapped one of their countrymen.

On Thursday, local media quoted AKG spokesman Police Lt. Col. Elmer Cereno saying there were two main methods by which criminal syndicates ensnare their victims. The first involves a junket-style operation that recruits gamblers in China, pays for travel and accommodation and fronts money for gambling purposes, with the understanding that the gambler will repay the borrowed sum as well as a 20-30% cut of any winnings.

Should the gambler lose more than he expected and be unable to repay, the junket will detain him and then coerce his relatives on the mainland to honor his debts, with the explicit threat of violence against their loved one if his relatives aren’t forthcoming.

The other method involves luring wealthy Chinese to the Philippines under the guise of an investment opportunity, then simply kidnapping him and demanding ransom. These gangs sometimes employ Filipinos to pose as policemen to make an ‘arrest’ of a Chinese national, who is then locked in a ‘safe house’ until ransom is paid.

Cereno said the AKG was imposing new measures to combat these crimes, including assigning agents to monitor casinos as well as nearby condos and subdivisions where safe houses have previously been identified. The AKG is also distributing wanted posters and information sheets in casinos to alert both staff and patrons as to the risks that certain individuals may pose.

The AKG got a new director last month, as Col. Jonnel Estomo replaced the outgoing director who’d reached the mandatory retirement age of 56. Estomo’s first day on the job saw him order a surprise drug test of all AKG staff (which everyone passed, apparently). Estomo said the AKG needed the trust of the public if it was to do the job that it had been assigned.

The AKG’s announcement comes one week after China issued a strongly worded warning to the Philippine government regarding the safety of its citizens who either gamble in local casinos or who work for Philippine Offshore Gaming Operator (POGO) online gambling licensees.

The warning took on new significance this weekend following the death of a Chinese national who apparently fell from a fifth-story window while trying to escape from a POGO call center. The worker was handcuffed at the time, strongly suggesting that he was being held against his will by his Chinese employer.

The Philippine government said this week that the gambling issue would likely come up during the meeting later this month between President Rodrigo Duterte and China’s President Xi Jinping.