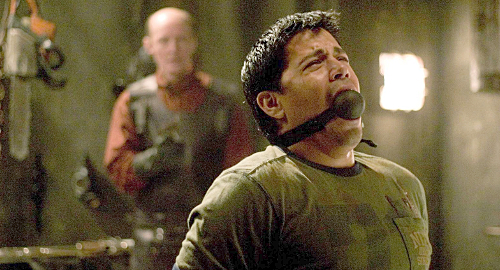 Philippine police have arrested five Chinese nationals who tortured a Chinese man in order to force his relatives back home to honor the man’s gambling debts.

On Wednesday, ABS-CBN News reported that the Philippine National Police Anti-Kidnapping Group (PNP-AKG) had arrested the five Chinese on Monday after a sting operation disguised as a ransom payoff.

Police said Chinese national Si Yuxiang was illegally detained by the five on Friday when he couldn’t make good on debts he’d incurred gambling at an unspecified casino. However, the sting operation in which the undercover cops met with the kidnappers occurred at the Solaire Resort & Casino in Manila’s Entertainment City gaming zone.

Si and two of the gang’s other victims were taken to a safe house in the province of Laguna, the site of Si’s torture. The precise mechanism of Si’s abuse went unreported, but police noted that they’d found a taser at the safe house, along with guns and handcuffs.

The gang’s abuse of Si was reportedly recorded on video, which was then sent to Si’s relatives on the Chinese mainland in order to coerce them into paying Si’s debts. Si’s shaken family sent the kidnappers P280k (US$5,230) but they demanded an additional P150k, prompting Si’s family to contact China’s Ministry of Foreign Affairs, which in turn contacted China’s embassy in the Philippines, which then enlisted the help of the PNP-AKG

Following the meeting at Solaire, PNP-AKG agents trailed their contacts to the safe house, leading to both Si’s rescue and the arrest of the five Chinese nationals. Police also detained a Philippine national who allegedly acted as the gang’s driver and also participated in Si’s torture. Four other Chinese nationals and three Filipinos are also being sought for their alleged involvement in the gang’s activities.

Stories of gaming-related illegal detentions have been rife in the Philippine media for years, pushing local politicians to craft new legislation calling for stiff penalties of up to 14 years in prison for individuals involved in loan sharking operations at casinos.