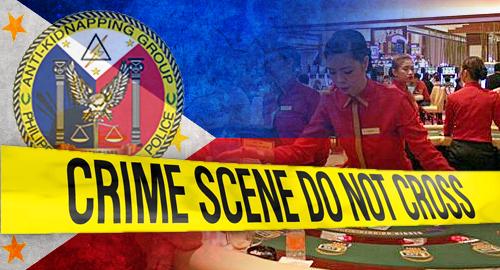 While Macau’s gaming-related illegal detentions are on the decline, Philippine police are having trouble reining in local kidnappers.

This week, Teresita Ang See of the Movement for Restoration of Peace and Order (MRPO), a local anti-crime watchdog group, told the Philippine Star that casino-related kidnappings – in which loan sharks detain unlucky gamblers until their friends or relatives can make good on their debts – were “getting to be a lucrative business.”

Ang See’s comments followed reports of a male Chinese national who managed to escape his kidnappers, to whom he owned a sizable gambling debt from play at a casino in Pampanga. The victim claimed that other Chinese nationals were being held for similar debts.

Glenn Dumlao, chief senior superintendent of the police Anti-Kidnapping Group, told the Star that two of the nine Chinese kidnappers had been arrested. The Chinese embassy reportedly released a photo of a “badly beaten victim” to remind Chinese nationals of the perils of getting involved in gambling while traveling abroad.

Similar kidnapping stories have flooded local media over the past year, most of them involving Chinese nationals who travel to casinos in Manila because there are no legal gambling venues at home. Philippine legislators are working on toughening punishments for casino loan sharks via the the Protection Against Casino Loan Sharks Act of 2017.

The MRPO’s Ang See claimed that some kidnapping victims have been put to work while their ransom is being arranged. This work reportedly involves toiling in dodgy methamphetamine laboratories or with illegal online gambling operations based in the Philippines.

THAI NATIONAL RESCUED
A similar story was published this week by Taiwan’s Central News Agency regarding a Taiwanese woman who was freed by Philippine police after being held against her will at a Chinese-run online gambling business in Makati City.

The 31-year-old woman was actually an employee of the online gambling firm who’d been (falsely, she claims) accused of embezzling RMB70k (US$10k). Police were able to rescue her after Taiwan’s Criminal Investigation Bureau alerted Makati police that they’d received an emergency call from the woman. Her supervisor and some of other staffers have been charged with kidnapping.

20% DAILY INTEREST
Cambodia has provided lots of similar casino-related kidnapping stories and this week brought word of a 20-year-old student from Thailand who was forcibly detained after running up a debt to a Korean gang operating out of a casino in Poipet. The gang were reportedly charging 20% daily interest on her unpaid marker.

The Nation reported that the girl had dropped off her relatives’ radar on April 20. She was eventually exchanged after a negotiation with officials from the Thai-Cambodia Border Coordination Office, who’d put the unidentified casino under surveillance since last Sunday.

As the world’s largest casino market, it’s perhaps not surprising that Macau used to be plagued by casino-related detentions. But the special administrative region’s latest crime stats showed an impressive 44% fall in such incidents in the first quarter of 2018.