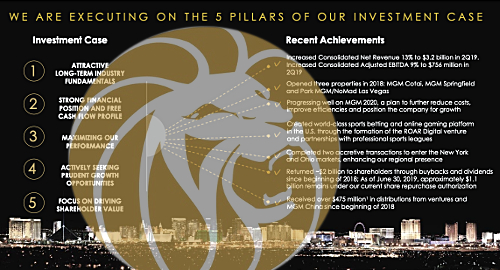 Casino operator MGM Resorts’ second-quarter results got a boost from its expansion efforts in both regional U.S. markets and Macau.

On Thursday, MGM reported total revenue of $3.22b in the three months ending June 30, a 12.7% year-on-year improvement. Operating income inched up 2% to $371m while net income fell by nearly two-thirds to $43m (largely due to restructuring costs from the company’s controversial payroll purge).

Revenue from MGM’s mainstay Las Vegas Strip operations was essentially flat at $1.47b thanks to a 7% fall in table games drop and a four-point decline in table win. This resulted in a negative impact of $26m, pushing the Strip properties’ adjusted earnings down 4% to $418m.

MGM’s U.S. regional operations reported revenue up 29% to $911m, largely due to the opening of MGM Springfield in Massachusetts and the dual acquisitions of Empire City Casino in New York and Northfield Park in Ohio. Those three properties contributed $199m of Q2’s $202m regional revenue improvement, meaning nearly everything else was basically flat. But adjusted earnings were up one-third to $255m, so a win’s a win.

(Speaking of Northfield Park, MGM was wiping egg off its face on Thursday after some casino guests pointed out that the security guards’ uniforms featured a badge icon that bore a striking resemblance to the six-pointed stars the Nazis forced Jews to wear during World War II. An MGM spokesperson said the resemblance was “certainly not our intention” and that the uniforms — which are also in use in some other MGM casinos — would be redesigned.)

In Macau, the continued ramp-up of MGM Cotai — including new VIP gaming areas and new-to-market mass gaming tables — helped boost revenue by 26% to $706m and adjusted earnings by 43% to $171m. MGM China saw decent gains in both VIP and mass table turnover, while win rates also improved in both categories.

MGM’s stake in the MGM Growth Properties (MGP) real estate investment trust generated distributions of $97m during Q2, although MGM paid $237m to MGP for renting the land that MGM used to own.

MGM continues to tout the ‘key growth opportunities’ of (a) potentially obtaining a Japanese integrated resort license, and (b) sports betting and digital gaming through its ROAR Digital joint venture with GVC Holdings. The latter is set to launch a digital sports betting platform “before the start of the NFL season,” but otherwise the company said little about the JV.

MGM CEO Jim Murren threw shade at rival Caesars Entertainment during the analyst call, saying MGM wouldn’t be bidding on any properties that Caesars’ new owner Eldorado Resorts may try to unload. Murren said MGM looked at the Caesars properties before the Eldorado deal “and we’re certainly not looking at them now … We like what we own, and are not really interested in owning anything else.”

Murren said the company’s MGM 2020 plan is going so well (for the company, not the thousands of redundant workers) that he boosted this year’s expected savings from $70m to $100m. But as the late great Joe Strummer once said, if you’re after getting the honey, then you don’t go killing all the bees.