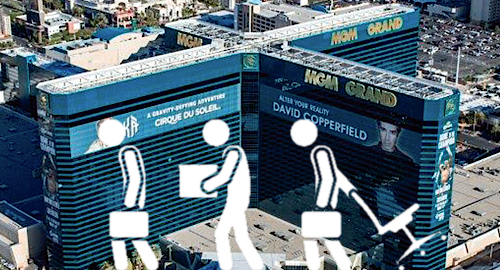 On Thursday, the Reno Gazette Journal reported that MGM planned to furlough 140 managers at its Las Vegas properties starting Monday. MGM spokesperson Brian Ahern said the “temporary reductions” were the result of projections showing business volumes will “remain low for the beginning of the year due to the pandemic.”

MGM furloughed thousands of staff last spring when the pandemic shut Nevada casinos for months, but capacity restrictions imposed as a condition of reopening led MGM to permanently lay off 18k staff – one-quarter of its workforce – in August. Other Vegas casino operators were forced to make similar cuts, including some announced earlier this week after capacity was further limited late last year.

On Tuesday, a Bureau of Labor Statistics report showed Las Vegas had an unemployment rate of 11.5% in November. That’s lower than the 16.4% reported in El Centro, California, but Vegas has the dubious honor of boasting the highest jobless rate among 51 metropolitan areas with a population of 1m or higher (second place went to New Orleans at 9.8%). Vegas also had the highest year-on-year rise in its unemployment rates, gaining 7.9 points from November 2019.

Vegas casino bosses have come to describe their new customer base as ‘drive-in’ traffic from neighboring states, in contrast to the hordes of visitors who used to fly in from more distant states and other countries. November’s vehicle traffic to Vegas from Southern California was down less than 5% year-on-year while traffic through McCarran International Airport was off 56.7%.