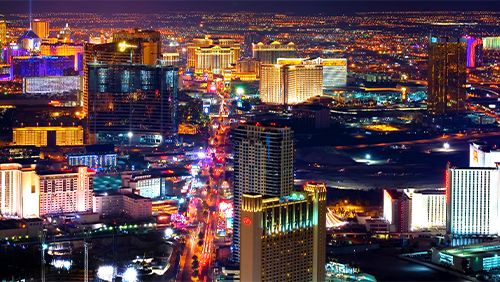 One thing is perfectly clear about Nevada – the pace at which the state can recover from COVID-19 is perfectly unclear. It has previously been predicted that bringing Las Vegas and other Silver State cities back to their normal operating levels would take at least three years, but the introduction of the coronavirus vaccine gave analysts and industry insiders reason to believe things would move quicker. That now seems like a somewhat dubious claim, as the M Resort has announced a new round of job cuts. This isn’t the last of the workforce reductions in the state, either, as other properties are hinting that they may be forced to let some employees go, as well.

Located in Henderson, Penn National Gaming’s M Resort has been a popular hotspot over the years, but the continued fallout from the coronavirus pandemic has caused it to turn into a veritable ghost town, operating well below its normal levels. As a result, and with yet another COVID-19 spike in Nevada appearing, the casino announced this week that it is breaking off the relationship it has with 159 employees. Jeff Morris, a spokesperson for Penn National, told the Las Vegas Review-Journal (LVRJ) that the cuts are “the very unfortunate reality of not knowing how long this global public health threat will last or when we’ll be able to resume full operations.”

Nevada has been reeling from the effects of the coronavirus since last March, never able to find a steady course. Commercial activity in the state has been drastically reduced, with casino floors, bars, restaurants and other public venues forced to operate at just 25% of their normal levels. Hotels have had difficulty attracting guests, which has led many to shut down completely on weekdays as reservations dried up.

Per updated COVID-19 data from yesterday, Nevada has 2,423 new positive cases of the virus, with 29 more deaths recorded. There have been over 235,455 cases in total since the virus first landed in the state and the statistics have forced Governor Steve Sisolak to maintain his restrictive posture regarding commercial activity in the state. This isn’t sitting well with most people, including Las Vegas Mayor Carolyn Goodman, who has dubbed Sisolak a “dictator” that is sending Nevada back to the Dark Ages.

In addition to the cuts at M Resort, Wynn Resorts is looking at making changes, as well. Its Wynn Las Vegas property has hinted, according to a report by Eater Las Vegas last month, that it is considering furloughing some employees as the pandemic-forced restrictions wear on. The LVRJ reports that The Tropicana has announced plans to potentially let go of an additional 132 employees this month, which will be added to the group of 702 that were released last October. At the end of 2020, tens of thousands of casino employees – in Las Vegas alone – were still out of work.