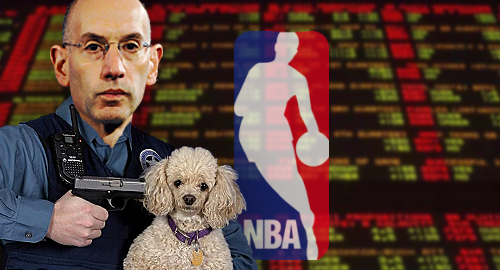 Sports betting operators are officially being strong-armed into paying the National Basketball Association a fee for official data or losing the opportunity to offer a proper roster of in-play wagering markets to bettors.

On Friday, ESPN scribe David Payne Purdum broke the news that U.S. sportsbooks had received a de facto data ultimatum from Sportradar, an official supplier of NBA data to U.S. sports betting operators in states where such activity is legal.

The letter, since obtained by Legal Sports Report, informs Sportradar’s customers that “only Authorized Gaming Operators of the NBA are eligible to receive the NBA Official Data Feed” for wagering in betting-friendly states. As of 11:59 p.m. EST on May 28, “all Authorized Data Distributors must cease providing to you NBA Official Data” unless operators prove that they know the NBA’s secret handshake.

Earlier this month, rumors circulated to the effect that both the NBA and Major League Baseball were threatening to cut off the official data spigot unless sportsbook operators paid the price—supposedly 0.25% of betting handle on their respective sports—of becoming official league partners (the NBA’s ranks of which include FanDuel, The Stars Group and MGM Resorts).

An NBA exec told LSR that U.S. betting operators that have yet to secure partnerships have been operating in a “season-long grace period” but grace was now in short supply. An MLB exec echoed this grace period language, adding that MLB was also looking to monetize “rights to use other MLB intellectual property and access to certain marketing opportunities.”

It’s unknown whether Sportradar rivals such as Genius Sports are making similar demands of their betting customers. There’s also some debate as to whether U.S.-licensed books might opt for unofficial data feeds should the leagues’ sharp-elbowed demands prove unpalatable.

The NBA and MLB have been most strident advocates for giving the major North American sports leagues a cut of U.S. betting turnover, which they originally called an ‘integrity fee’ but has since been rebranded as a royalty. The leagues first sought an absurd 1% of betting handle, which appears to have been a fake-out intended to make their 0.25% demand seem more reasonable.

The leagues have to date unsuccessfully pressed state governments that are considering betting legislation to include league demands for a cut of wagering handle. Finally realizing this was a non-starter, the leagues pressed for making it mandatory for betting licensees to use official league data for in-play wagering purposes.

The leagues scored paydirt earlier this month when Tennessee became the first state to approve a betting bill with a mandatory official data requirement. The state’s bill also granted the leagues a veto over what types of wagers licensed sportsbooks can offer their customers.

NBA commish Adam Silver’s (pictured, delivering the news) timing is impeccable, given that the NBA Finals are set to kick off on May 30. Figures released last week by New Jersey’s gambling regulator showed that basketball wagers accounted for $28.4m (32.5%) of the state’s betting handle over the first four months of 2019.