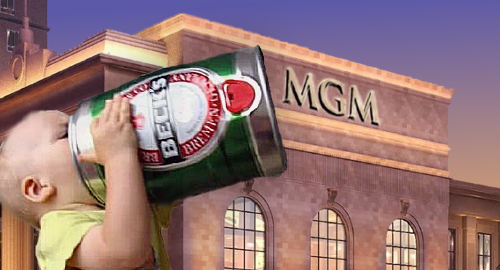 Casino operator MGM Resorts has been fined $100k for allowing minors to access the gaming floor and quaff forbidden beverages at its Massachusetts property.

On Thursday, the Massachusetts Gaming Commission (MGC) announced that it had imposed a $100k ‘civil administrative penalty’ on the MGM Springfield casino for multiple instances in which individuals under 21 years of age were able to gain access to the casino’s gaming floor and consume alcohol.

According to the MGC’s Investigations and Enforcement Bureau (IEB), the underage infractions started last August and totaled 22 incidents over the next three months. A further eight incidents occurred in a 10-day span starting in late November, followed by 14 more incidents between last December and late April.

The incidents kept reoccurring despite the MGC ordering MGM to block under-21’s access to the crosswalk across the gaming area, limiting them to the perimeter of the slots and table games zone, but apparently this ‘look but don’t touch’ approach only seemed to whet the young-uns’ appetite for forbidden fruit.

While MGM won some small praise for cooperating with the IEB, the company has been tasked with crafting “a detailed security plan outlining immediate measures for improved compliance.” MGM is also enhancing measures for managing the property’s security department and providing security staff with additional training on regulatory compliance.

ENCORE BOSTON HARBOR TO SERVE BOOZE UNTIL 4AM
Speaking of casinos and hooch, this week saw the MGC grant regulatory approval for Wynn Resorts’ Encore Boston Harbor casino to serve alcohol to ‘active’ gamblers until 4am. For the record, that’s two hours later than Boston bars and restaurants are legally permitted to keep serving their customers.

While Boston prudes are protesting the move and predicting carnage on the roads as ginned-up gamblers drive home in the dark, the MGC’s approval was something of a given, as MGM Springfield was granted similar alcohol serving privileges when it opened its doors last year.

All Massachusetts casinos must ensure that they don’t keep serving gamblers who display visible signs of intoxication. Last week, Pennsylvania’s SugarHouse casino was fined $15k for serving one gambler 17 free cocktails in eight hours, which led to an ‘altercation’ requiring police backup when said gambler was finally cut off.

Meanwhile Wynn execs insist Encore will open as scheduled at 10am on Sunday, June 23, despite loads of work left to be done, not to mention the disruption caused by this week’s failed talks between Wynn and MGM over a possible sale of the property. The grand opening will be preceded by three eight-hour ‘test days’ to ensure all the gaming amenities are functioning as advertised.