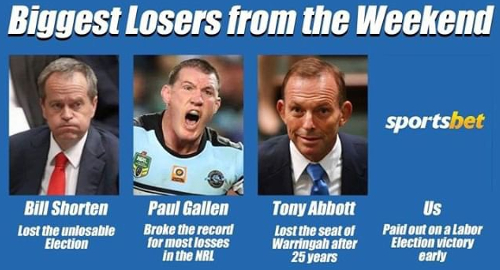 Australian online sports betting operator Sportsbet is looking at a AU$5.2m deficit after paying out early and incorrectly on the country’s election results.

But the incumbent Liberal/National coalition defied pollsters by winning a third three-year term to rule the country. Sportsbet paid out AU$1.3m to bettors who’d backed Labor to win based on the company’s assertion that 70% of its election wagers were on Labor and “punters rarely get it wrong on elections.”

Actually, bookies have proven as unreliable as pollsters on numerous occasions in recent election markets, including the UK’s Brexit vote and the 2015 General Election. In 2016, Sportsbet’s parent company paid out £1m early on Hillary Clinton defeating Donald Trump, an upset that, combined with winning Trump wagers, put a £5m dent in Paddy Power Betfair’s annual profit.

Sportsbet spokesperson Richard Hummerston told local media that, in addition to those misguided early payouts on Labor, the company must now also pay bettors who’d backed the Coalition, which the company says will result in a total payout of over AU$5m.

Fortunately, Sportsbet – like its parent company – has proven adept at milking all the free publicity it can muster (including this article) from debacles such as these. Small wonder that its brand recognition routinely tops all others in Australia’s highly competitive online beting market.

In less upsetting news for Aussie bookmakers, GVC Holdings’ Ladbrokes Australia unit reported taking an AU$1m bet – the biggest single wager in the Aussie firm’s history – from a New South Wales punter who backed Labor to win. Given the odds at the time, the customer would have netted a payoff of only AU$230k had the Labor vote lived up to its projections.