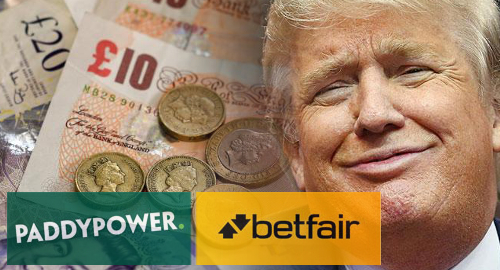 UK-listed gambling operator Paddy Power Betfair (PPB) says the tiny hands of US President Donald Trump made a dent in its Q4 earnings.

The numbers were up despite a challenging November and December, during which sportsbook stakes rose 28% while revenue gained only 12% (-1% in constant currency) due to “customer-friendly” sporting results.

The unfavorable sports results cost the company around £40m in Q4, and nearly £5m of that shortfall came via Trump’s surprise election in November after PPB had already paid out early to bettors who backed Trump’s rival Hillary Clinton to take up residence in the Oval Office. The company said it partially offset this decline via “lower than expected marketing and staff costs.”

The Q4 hit was felt most harshly at the online level, which suffered “some weakness in gaming.” Online revenue fell 3% despite sports stakes rising 15% and a strong performance by its Australian-facing Sportsbet brand, which reported online sports stakes and revenue growing 25% and 18%, respectively.

PADDY MARKETING STILL MAKING WAVES
The Paddy Power half of PPB earned a dubious honor last week by placing two of its television commercials in the Advertising Standards Authority’s top-10 most complained about adverts of 2016. Paddy ranked #5 with the rerelease of its 2010 ‘blind footballer kicking cat’ spot, which garnered 450 viewer complaints last year.

Paddy also placed seventh for a TV spot in which Scottish punters declared they weren’t upset over their team failing to qualify for the UEFA Euro 2016 tournament because they could still bet on England to lose. The ad received 220 complaints, but the ASA rejected claims that the ad was racist, saying the Scots stereotypes on display were more “a celebration of Scottish culture rather than malicious mocking.”

The ASA declined to uphold the public’s complaints against either Paddy advert, and ASA CEO Guy Parker noted that the ads that attract the most complaints “are often not the ones that need banning.” Of the ads that made 2016’s top-10, the ASA determined that “the boundary between bad taste and serious or widespread offence had been navigated well enough.”