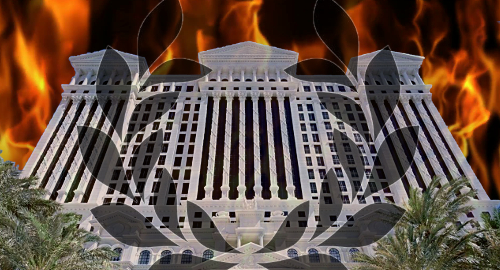 Figures released Thursday show Caesars generated revenue of $2.11b in the three months ending March 31, up $143m (7.3%) from the same period last year. However, the addition of two Centaur Gaming casinos in Indiana accounted for $84m of that rise, and favorable gaming hold across the Caesars empire accounted for up to $35m, leaving the like-for-like gain closer to $25m, around 1%. Et tu, math?

Operating income nearly doubled to $240m thanks to the Centaur acquisitions but also from respectable growth in Caesars’ Las Vegas operations. However, Caesars booked a $217m net loss for the quarter, thanks mainly to – what else – the company’s tangled debt obligations, for which even an extra $29m in Trump tax cuts couldn’t compensate.

Caesars’ Las Vegas unit was the standout performer, with revenue up 5.8% to $955m thanks to favorable hold, higher slot volume and hotel occupancy rising 2.5 points to 95%. The ‘Other US’ division was technically the top earner ($1.01b, +9.1%) but would have been down by $42m absent those Centaur contributions, not to mention increased competition in Atlantic City and inclement weather keeping those blue-haired slots grannies tucked away at home. The ‘All Other’ unit was up 5% to $150m.

The ‘Other US’ division will get a boost in the current quarter after the company launched operations at the new Harrah’s Northern California outside Sacramento. The new property, which opened April 29, is expected to add $5-10m in annual incremental earnings.

Caesars has made no secret of its eagerness to carve off a big piece of the expanding US legal sports betting market. Caesars currently operates 17 sportsbooks, including five outside Nevada, and the company recently struck a deal with DraftKings to ensure rapid deployment of betting operations whenever such activity is legalized in the states where Caesars operates.

Former Affinity Gaming CEO Tony Rodio will officially take Caesars’ reins on May 6, replacing Mark Frissora. It remains to be seen whether Rodio will end up being the last Caesars CEO, as Icahn is reportedly hell bent on engineering some big deal that could eventually result in a wholesale identity change.