Michigan’s former governor, Rick Snyder, gave a one-fingered salute to the gambling industry and his constituents as he was leaving office last year, vetoing a bill that would have allowed online gambling to come to the state. Not surprising for a man who once pardoned a friend who was classified as an habitual drunk driver. Now that Snyder no longer pulls the strings, lawmakers are trying again to introduce online poker and other casino games and are hoping the new governor will be more receptive. 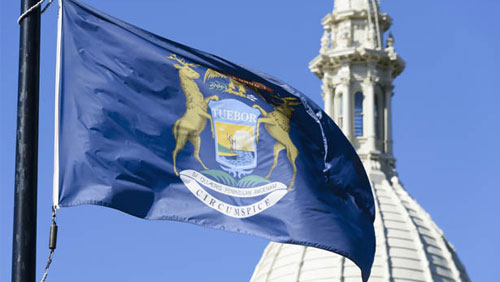 A House committee discussed bills yesterday that hopes to introduce legal online casinos and fantasy sports contests to the state. They would allow Michigan to bring its gaming and betting industries up to date while regulating the activity. Lawmakers have acknowledged that gambling is already taking place illegally and, as such, the state is not able to capitalize on the tax revenue that could be earned from making the activity legal.

Michigan Representative Brandt Iden explained during a committee hearing on Tuesday, “This is really about updates. This is about the future of the industry. This is about making sure Michigan stays competitive.”

Snyder vetoed a similar bill last year, asserting that there were “unknown budget concerns” surrounding gambling activity. This, in spite of the fact that there are numerous studies available that indicate how a gambling operation can be budgeted and how much money can be generated. Many have asserted that his true motive for the veto was concern that the Michigan Lottery might lose funds, which indicates that he had virtually no clue about the gambling that was already taking place in the state.

The fantasy sports bill, the Fantasy Contests Consumer Protection Act, would bring the activity under the guidance of the Michigan Gaming Control Board. It solicits an initial license fee of $50,000, with an annual renewal of $20,000. Any fantasy sports contest that has less than 15 participants and under $10,000 in entry fees would not have to pay the fees.

Online gaming would be strictly limited to only in-state residents. Casinos would be required to employ “geofencing” technology to ensure anyone outside of Michigan’s borders could not access the platforms. The bill also seeks to repeal a statute that has been on the books for the past 21 years that prohibits casino licensees, as well as their employees, from making political contributions.

It’s possible that the new bills could be heard by the House Regulatory Reform Committee sometime next week. Lawmakers have been trying to ascertain Whitmer’s position on the matter, but have so far been unsuccessful in determining whether or not she is supportive of the legislation.