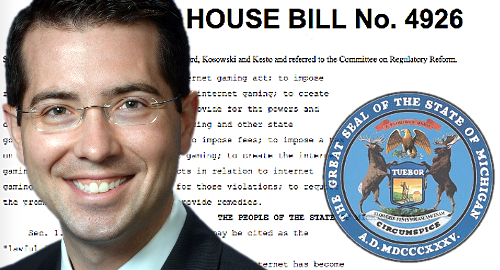 Michigan is making another run at passing online gambling legislation, but whether this latest bill will make any further progress than previous efforts remains unclear.

Tuesday saw the publication of HB 4926, brought to you by Rep. Brandt Iden (pictured), with the support of two other Republican members of the state House of Representatives and a lone Democrat. The bill is set to be discussed on Wednesday at 10:30am local time by the House Regulatory Reform Committee, on which Iden sits as chairman.

Michigan has previously relied on state Senator Mike Kowall to carry its online gambling hopes and dreams, but while Kowall’s efforts managed to get two Senate committee hearings – including the latest this March – no further forward progress was ever made. So why should HB 4926 be any different?

Michigan’s gaming landscape is complicated by its mix of both commercial and tribal casino operators, and Kowall’s bills required tribes to waive their sovereign immunity and pay the stipulated fees and taxes if they wanted to participate in intrastate online gambling.

The tribes countered that the Indian Gaming Regulatory Act (IGRA) prevents states from charging tribes any fees or taxes beyond the cost of regulating gaming activity, unless the state offers the tribes some kind of “meaningful concession” in return.

HB 4926 dispenses with the requirement to waive sovereign immunity, saying only that Michigan’s federally recognized gaming tribes can participate in online gambling “if authorized by a compact the tribe has entered into with this state under [IGRA].”

None of the state’s gaming tribes bothered to show at the March hearing, and it remains to be seen whether they’ll be sufficiently motivated by Iden’s effort to show up on Wednesday.

TAXES, FEES AND MANDATORY POKER
HB 4926 would impose 15% tax on online gambling revenue (up from 10% in Kowall’s last bill). However, should an online licensee enter into or amend a compact with the state that calls for a revenue-sharing payment or other payment to the state that is lower than 15%, then that lower rate would apply. Should the state enter into or amend compacts with more than one person, then the lowest agreed upon rate among the parties would apply.

Online licenses would be valid for a five-year term, with an upfront fee of $200k, plus an additional $100k for each year after the license is issued. License applications must also be accompanied by a $100k fee.

Online licensees’ technology partners are broken down into two categories. Platform providers must pay upfront fees of $100k and $50k for each year after receiving their five-year license. Mere technology vendors must pay only $5k upfront and $2,500 per year.

HB 4926 would permit interstate compacts with other gaming-friendly jurisdictions provided “the gaming under the agreement is conducted only in the United States.”

Those liquidity-sharing compacts will be urgently needed, as HB 4926 says that the products online licensees are allowed to offer “must include, but need not be limited to, poker,” a requirement that would eliminate one-third of New Jersey’s current online licensees.

HB 4926 would allocate $5m of the state’s annual share of online gambling revenue to its first responder presumed coverage fund, while a further $2m would go to “the grape and wine industry council,” a group close to Iden’s heart. Who wants to bet that Michigan’s online gamblers will be drowning their sorrows after Wednesday’s hearing?