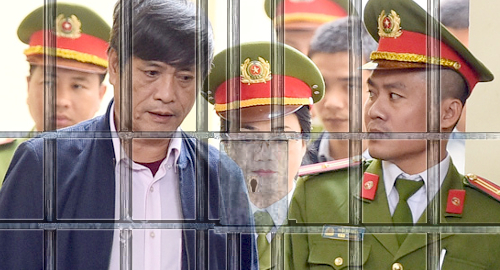 Two of Vietnam’s former top law enforcement officials will spend a decade on the wrong side of prison bars after being convicted of involvement in a major illegal online gambling case.

The pair were among 91 individuals sentenced on Friday for their connection with the massive online gambling operation that Vietnamese authorities rumbled in March. The scheme involved the use of popular mobile cash cards to buy virtual credits for online casino games that could later be redeemed for real cash.

The two senior cops were charged with misusing their authority to shield the gambling operation from the prying eyes of other, less corrupt officials. The sentences they received exceeded the terms sought by prosecutors, indicating that the court was intent on sending a message to other senior police and government officials.

The remaining defendants were either fined or sentenced to up to three years in prison. The three mobile communications firms that issued the cash cards – Viettel, Vinaphone and Mobiphone – were ordered to repay a portion of the $420m that was illegally wagered via the gambling ring.

Vietnam keeps a tight lid on its citizens’ capacity to gamble, although the government has occasionally appeared intent on loosening its grip over the past few years. Pilot projects for allowing betting on international football matches and allowing locals to gamble in select casinos have been floated, although their practical application to date has been nonexistent.