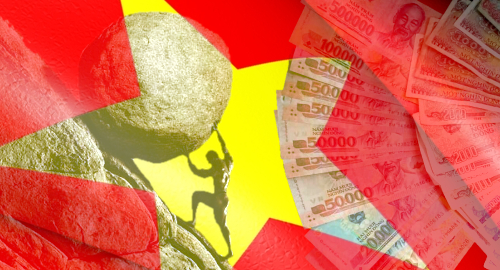 On Tuesday, authorities in Hanoi and Quang Binh province announced the arrests of multiple individuals suspected of involvement in two separate illegal online gambling operations. Each of the two gambling rings reportedly handled wagers worth over VND1t (US$43m) before the authorities pounced.

The Hanoi bust resulted in the arrest of 16 individuals, including the three suspected ringleaders, who each put up around VND300m in February 2019 to establish a support operation for a number of intermediary websites that steered gamblers to sites based outside the country.

As with previous Vietnamese busts, gamblers purchased ‘points’ from third-party sites that could be used as wagering currency. The ring established branch offices in several cities and was reportedly a sufficiently large operation to require staff operating out of high-end condo suites to work shifts to ensure round-the-clock support for nearly 4,000 gambling clients.

The Quang Binh sports betting and lottery operation was reportedly much smaller in scope, having been in operation only since July. But it appears to have catered to a more well-heeled client, as the authorities claimed it handled a similar volume of wagers as the more experienced Hanoi operation.

Both operations were significantly smaller than the operation busted in Ho Chi Minh City last month, which reportedly handled VND10t (US$431m) in wagers from around 1,000 accounts since 2017. Around VND1t of that sum was wagered this July alone, suggesting the operation was enjoying healthy growth.

In 2017, Vietnam proposed a legal sports betting regime, but sandbagged it by limiting play to a land-based terminal option in 20 districts that would offer only a fraction of the sports options available through unauthorized operators. The restrictions have so far deterred any local or international operator from seeking to operate under this unattractive regime.

In June, the government issued its latest promise to remedy this void by tweaking the rules to add more sports, allow individuals to place bets over the phone and pay via e-wallets while lifting the maximum daily spending cap of VND1m (US$43). We’ll check back in another three years to see how they’re doing.

AND YET LOTTERIES ARE GOING DIGITAL

Vietnam has been making progress on other areas of its legal gambling market, including a plan to permit state-run lottery operator Vietlott to offer lottery sales via SMS text messaging. In June, Vietlott announced plans to partner with three telecom operators – Mobifone, Viettel and Vinaphone – on an SMS sales channel starting in the fourth quarter of 2020.

Since launching in 2016, Vietlott has undergone rapid growth, thanks to the popularity of Mega 6/45, the country’s first Western-style numerical lottery product. Vietlott currently boasts nearly 5,000 retail points of sale in 63 regions of the country.

Vietlott claims the SMS lottery will not only offer players more freedom in how they make their picks, but will also allow greater monitoring of individuals’ spending and help the company live up to its responsible gambling commitments. Now if they can only figure out a way to convince the government to allow them to add SMS sports betting.