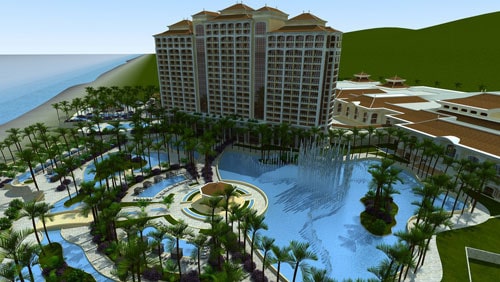 The Grand Ho Tram Resort & Casino was supposed to be a huge money-maker when it opened on Vietnam’s southern coast seven years ago. However, things haven’t worked out as planned and the ongoing COVID-19 pandemic is helping anything. With waning traffic, and even a change of ownership, things remain stagnant and it doesn’t seem like they will turn around soon. Vietnamese media outlets hint at dire times ahead, but the project’s developers believe they might have an ace up their sleeve.

The revenue track record over the past several years has anything but positive. It reported losses of just over $35.5 million in 2017, followed by losses of around $27.7 million the following year. Adding to that was another poor performance last year, which saw the resort take a $25.8-million hit. All told, since it opened in 2013 until the end of last year, Grand Ho Tram has reported total losses of $378 million. Most of that is attributed to exorbitant operating expenses and interest fees. These figures make the assertion that $4.2 billion would ultimately be invested in the project highly doubtful.

The Grand Ho Tram was acquired by Warburg Pincus, an equity firm out of the U.S., in March of last year. The company purchased its majority stake, adding to its existing 10%, from hedge fund Harbinger Capital Partners, but hasn’t been able to get the property on track toward gains since then. The property already has a large, 540-room hotel, a foreigner-only casino and an eighteen-hole golf course, but faces one major issue. Since Vietnam is only now testing whether to allow locals to gamble at casinos, Grand Ho Tram can’t expect Vietnamese to hit the gaming floors, and the current coronavirus pandemic is keeping the property from becoming a major attraction.

This is going to hurt the property in the long run, as well, but a number of changes have been seen recently that executives and investors hope will turn things around. To increase the casino’s gaming options, it must first have in place a certain number of five-star hotel rooms, according to an agreement between the resort and the government. InterContinental Hotels Group (IHG) came in last November to rebrand The Grand Ho Tram Hotel to the InterContinental Grand Ho Tram, and will also take over management of the property’s Holiday Inn Resort Ho Tram Beach. That property was originally expected to open this year but, for obvious reasons, was put on the back burner.

Having IHG will, eventually, give Ho Tram a boost. The company now has almost 6,000 hotels in its portfolio and had $4.6 billion in revenue last year. While 2020 has brought a downturn because of COVID-19, the company is still turning a profit and should be able to give the venue some support.

In addition, the property picked up a new CEO this year, turning to South Shore Holdings for talent. Walter Power came in to get the company sorted out, promising to help get everything in order. Hopefully, he will have an easier time with Grand Ho Tram than he did with South Shore and Macau’s The 13.