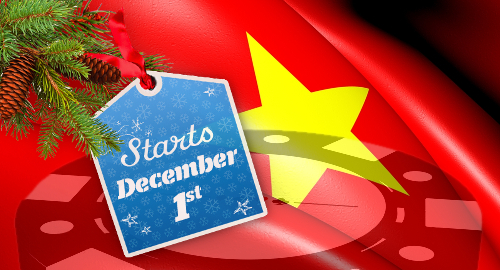 Vietnam’s long-awaited trial of allowing local residents to gamble in casinos will get underway in December.

Last week, Vietnam’s Finance Ministry issued Circular 102/2017/TT-BTC, which adds details to the government’s Decree 03/2017/ND-CP, which became official government policy on March 15. The Circular says that its requirements will take effect as of December 1, 2017.

For years, Vietnam has been promising to launch a three-year ‘pilot program’ that will relax the longstanding prohibition on Vietnamese citizens gambling in casinos. The Circular confirms previously suggested requirements under which local residents can qualify to participate in this program.

Vietnamese gamblers will have to provide documentation indicating a monthly income of at least VND 10m (US $440). Previous reports indicated that locals will face a daily casino entry fee of VND 1m or a monthly pass for VND 25m ($1,100), although these figures weren’t contained in the Ministry’s Circular.

Casinos will have to either open books on or issue electronic cards to locals entering their venues and must retain records on locals’ casino comings-and-goings for a period of five years to enable the government to monitor its citizens’ activity.

The Circular also doesn’t clarify which casinos will be allowed to participate in the locals trial. Earlier government communiqués suggested only two venues – one in Quang Ninh province and the other on Phu Quoc island – would be part of the trial, but both of these properties are still under construction.

In April, the government appeared to have dropped references to any limit on the number of casinos participating in the locals trial, but last week’s Circular offers no further clarity on this point, referring only to “casino businesses permitted to pilot Vietnamese casino players.”

The Finance Ministry also issued a new Circular regarding the government’s plans to authorize a five-year trial of betting on international football matches, as well as on greyhound and horse races. These plans have been equally long in coming but will also take effect on December 1.

But here again, details on who will be allowed to offer sports betting are scant. What is known is that bettors will be limited to total daily wagers of VND 1m or less, which critics claim is far too low to put a dent in the thriving business of unauthorized sports betting operators. There’s also no provision for online betting, which will further limit patronage of state-approved betting operators.