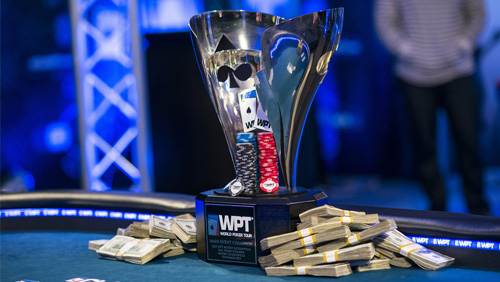 The World Poker Tour has announced ten Main Event tour stops for 2019, and the big news is most of the American events will have a break when they reach the final table, where the action moves to the HyperX Esports Arena Las Vegas at Luxor Hotel & Casino.

John Duthie wants to make partypoker LIVE the #1 live tournament stop in the world by the time 2022 rolls into town.

Better than the World Series of Poker (WSOP).

Somehow, I don’t think Adam Pliska and the family will be standing in the garden hanging the washing out while Duthie and the rest of the partypoker brigade whip up a storm.

I can’t see that happening.

The WPT is arguably THE best in the business when it comes to hosting a live tournament in North America. The icing on the cake would be the same brand recognition in Europe, and ironically, partypoker is helping them achieve that.

So what tricks do the WPT have up their sleeve?

The WPT Announce a ‘Portion’ of Season XVII Stops

The WPT has announced the first ten events of the 2019 portion of Season XVII, with the promise of more to come pending the dotting of the I’s and the crossing of the T’s.

The first event of 2019 is a $10,000 buy-in WPT Gardens Poker Championship in Hawaiian Gardens, California taking place January 12 – 16. It’s the second time the WPT has visited the Gardens this season after Simon Lam conquered 584-entrants to win the $565,055 first prize, overcoming a final table containing Jake Schindler (2nd), Men The Master (3rd) and Craig Varnell (4th). It will also be the first final table to migrate to the HyperX Esports Arena Las Vegas at Luxor Hotel & Casino.

I’m not sure about the timing on this one with the PokerStars Player’s No-Limit Hold’em Championship (PSPC) and the PokerStars Caribbean Adventure (PCA) taking place simultaneously. For a $10,000 to make up the numbers you need the pros, and most of them will be in the Bahamas, for sure.

After the Californian opening, the team flies out to Sochi, Russia. It will be the first time the WPT has organised an event in Russia, and their partners partypoker LIVE will be on hand to provide a route via online satellite qualification. The pièce de résistance is a $3,000 buy-in, $1.5m GTD Main Event, taking place Jan 21-27, and boy oh boy will it be cold.

After Russia, the WPT returns to the award-winning Borgata Hotel & Casino for the second time this season. The $3,500 buy-in WPT Borgata Winter Poker Open will run Jan 27-31, and the final table will take place at the HyperX Esports Arena in Las Vegas. Erkut Yilmaz vanquished 1,075 foes to win the $575,112 first prize in the WPT Borgata Poker Open earlier this year.

A visit to Canada comes next.

Then we have the sickest sounding WPT event of the season. WPT Rolling Thunder takes place March 8-12 with a $5,000 buy-in event at Thunder Valley Casino Resort. It’s the first time that the Rolling Thunder event has peaked at a $5k buy-in.

The WPT then returns to Barcelona for the first time since Chanracy Khun won a WPT title way back in Season XI. It’s the second partypoker LIVE assisted tournament of 2019, with a €3,300, €3m GTD Main Event taking place March 10-17, and it will be interesting to see if the WPT brand can pull in the kind of numbers that the EPT and MILLIONS brand managed in 2018.

The WPT baggage handlers get a breather when the team moves to Dusk till Dawn (DTD) for the WPT European Championship, a £3,300 buy-in event April 7-14. Once again, partypoker will provide online and live satellite assistance. The WPT was last at DTD in Season XIV when Iaron Lightbourne beat Craig McCorkell heads up to win the £200,000 first prize. Last year, the WPT European Championships took place in Berlin with Ole Schemion battering 339-entrants into submission to win the €218,435 first prize.

WPT Choctaw appears for a second time May 17-20. Brady Holiman won the August event when he slammed 755-entrants into the rail on his way to a sealing a $454,185 win. The final table of the Choctaw event will also take place in Vegas.

The final open event, for now, will be the $10,000 buy-in WPT ARIA Summer Championship, taking place at ARIA May 27-31. It’s the same slot as when Darren Elias won his record-breaking fourth WPT Main Event title, dominating 161 other entrants to take down the $387,580 first prize in the Bobby Baldwin Classic, and it seems the cash game high roller’s name is no longer a part of the WPT equation.

Season XVII ends June 1-3 with the Baccarat Crystal WPT Tournament of Champions, the $15,000 buy-in event is open to all WPT Champions Club members, with Season XVII Champs getting a free pass. Notably, the game has a new sponsor after Monster headlined in 2016, and nobody took a punt in 2017. The final table plays out on June 3 at the HyperX Esports Arena.

The WPT is the nuts, but you have to wonder what Duthie and his ram raiders would do in the American market if Donald’s government ever allowed them to take a punt.