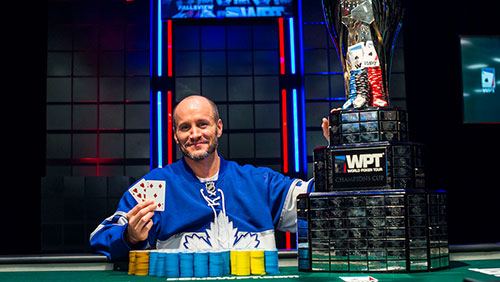 Mike Leah has won a World Poker Tour Main Event title and secured a place in the Champions Club after winning his fifth title in the Niagara Fallsview Casino in the past four years.

There is a tragedy in the death of the leaves. The crunch beneath your feet sounds like the crushing of tiny vertebrae. The decaying brown stain, a sign of separation from a oneness that this aching appendage once enjoyed.

Make a plant the feature of your windowpane and watch it flourish. Remove it from grace an watch it wilt. The environment then is everything. Give your leaf something familiar, something known, and watch it go.

I don’t know what’s going on in Mike “GoLeafsGoEh” Leah’s biology when he steps foot into the cardroom of the Niagara Fallsview Casino Resort but every one of his 50 trillion cells feels at home.

2014 and Leah wins the C$1,000 Fallsview Poker Classic. In 2016 he does it again. 2017 he went back-to-back. Now, he has his mitts on the most celebrated and coveted trophy to ever stand in the window and watch the most famous falls in the world.

Mike Leah has won the WPT Fallsview Classic to become a member of the WPT Champions Club. For the fifth successive season, the Fallsview Poker Classic crowd has grown from 383 to 419 to 423 to 489 to 517.

It seems that maybe the thoughts of the former World Series of Poker (WSOP) Main Event champion, Joe McKeehen, may not be universally shared when he tweeted:

I think it would be wonderful if the WPT realised Fallsview is the shittiest place on earth, especially to its players and looked to change that stop to somewhere that isn’t so unfriendly.

I’m not sure, Leah would share those sentiments, Joe.

And Leah isn’t the only player who feels cosy with his feet under the Fallsview poker tables. Maxim Heroux, the Season XVI winner, made a heroic defence of his title crashing out in 14th place.

Leah faced off against another Fallsview fan, Ryan Yu, in heads-up action. Last year, Yu finished 2/753 in a C$2,500 side event in this very casino, and there was no way he was going to better that end in this one, as both Yu and Leah stained the integrity of the event with a shocking ending.

Yu began the heads-up phase with a 10.8m v 4.7m advantage, but in the first hand, opened to 4m and then folded to Leah’s 4.7m shove indicating that the pair had struck a deal away from the table locking Leah in as the eventual winner. Yu continued to make the same suicidal moves until he eventually ran out of chips.

Leah’s victory (Yu’s gift) takes his live tournament earnings a nasal hair away from the $7m mark, and he places Shawn Buchanan, in the eighth spot in the All-Time Canadian Live Tournament Money Earned rankings.

It’s the 22nd live tournament victory of Leah’s career and his first major title outside of a collection of World Series of Poker Circuit (WSOPC) gold rings.

I made a mistake.

I’m going to blame the stuttering old man rat-a-tat-tatting his cane every second as he inches his way to the front door. I can’t concentrate. I feel like picking up my latte and drowning him in it.

In a previous 3: Barrels article I told you that between them the WPT Foundation and Latitude created $1.2m during the NVRFLD Super Bowl charity poker night.

In an official release from the WPT Media team, the confirmed amount raised for charity eclipses the $1.7m mark – a remarkable achievement in one night. Those benefiting include MATTER, Healing Haiti, Starkey Hearing Foundation, and Opportunity International.

The WPT Foundation has raised more than $11m in partnership with various charities, globally since inception.