Home / Poker / PCA Reports: From buckets and spades to the PCA; a view from the amateur 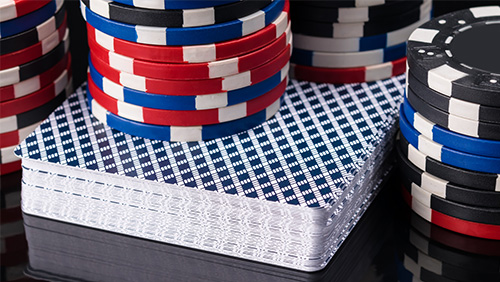 Another report from the PokerStars Caribbean Adventure, this time with Lee Davy recording a chance meeting with one of those rarely seen recreational poker players.

Those are the topics my son gives me to help him with his homework on the way to the Bahamas.

The lesson begins with a description of the word Oligopoly. Don’t you just love that word?

I think about it for a second. Yes. No. Maybe. No. There are too many poker rooms doing business for an oligopoly to have formed.

Next, we talk about Monopoly.

And so I subject him to a poker history lesson. I explain how partypoker became the market leader before American politics smeared their lipstick. Online poker rooms headed East en masse, except PokerStars, who stuck around and became the new market leader.

A monopoly was born.

But things are changing.

partypoker has finally gotten their act together. Poker players believe they’re putting the players first and the thin veil of PokerStars monopoly is beginning to flap heavily in the wind.

How do you create a monopoly, Dad?

I don’t know. I’m no business suit. I don’t have the experience. One area I do have experience in is a customer. I know how it feels. I know what I value.

So who are PokerStars’ customers, Dad, and what do they value?

I know you hate a man with a bad beat story so I will spare you the details. I ask merely for 200-words of your time. When I joined PokerNews in 2010 and was sent to work on the European Poker Tour (EPT), I felt like a firefly at a fly disco when I saw the PokerStars Caribbean Adventure (PCA) on the schedule.

The Bahamas, give me a piece of that!

I felt like I had just discovered a tear in a condom after a night of mad minty breath freshness.

Eight years later, and I get the call to return.

Can my boy come?

So off we go, homework and all.

We should have arrived on Saturday, but New York City had other plans. JFK Airport kept us in their clutches for too long, we missed our flight, and ended up in Newark Airport, two days later, with nothing to do except to watch the shadows of our mind keeping out the light by eating it alive.

So we decided to play pick out the poker player. I was the shark; he was the fish. The Spaniards, Italian and French stuck out like new teeth in a baby’s gum. Then my boy picked out this Adonis of a young man.

Slicked back hair, facial hair shaved along a ruler’s edge. A facial bone structure built by a genetic genius and dressed as sharp as a paper cut. At the other end emerged the whitest of white trainers; he walked with his head in the clouds. You could see through his skin’s thin page and read his story.

I get on the plane. An old guy sits next to me.

No chance. He’s too old.

You Are Never Too Old to Play Poker

So what’s an Englishman doing in Newark, I ask, knowing full well that his tale is another stuck in a car as it sinks to the bottom of the river story. It was. I won’t bore you with the details.

His name was Stephen Thirlwell, 62 from the coastal town of Lyme Regis. He was wearing a pair of Tommy Hilfiger specs, and a Superdry jacket. He smelled like he had just stepped out of Boots. Expensive. I don’t have a brand for you. A Christmas gift, maybe? He had a man bag underneath his seat.

Thirwell used to run a bucket and spade shop in Lyme Regis, before becoming the owner of a restaurant called The Ocean View. As we talk, I learned how loneliness consumed him after a break-up with his long-term girlfriend, and the first person to hold his hand and tell him that everything was going to be alright was poker.

A jet plane ride to Las Vegas and Thirwell was soon in the midst of poker’s private parts. An experienced gambler told him to compete in the 11 o’clock at The Mirage because it was full of drunks.

And that’s how Thirwell learned the game, by playing live games in Las Vegas.

And How Does PokerStars Fit In?

Thirwell’s love story with PokerStars is a familiar one.

The restaurateur found PokerStars because they were the biggest brand in the world. When you look for poker, you see PokerStars. It’s one of the primary pluses of being the major of the monopoly.

Thirwell doesn’t play much online. He prefers the live game and PokerStars are his go to events, frequent visits to Las Vegas apart.

Thirwell competed in the European Poker Tour (EPT) Deauville (Freddy Deeb knocked him out). Prague was ticked off his list (Jesus, it was cold), and he has also been to Panama (man what a dodgy place). But it’s the once a year PCA that Thirwell loves the most.

It’s an opportunity for Thirwell to meet old friends, all made playing poker, all of them Stateside. He stays in a hotel next to the Atlantis and is expecting to spend $8,000 on tournament buy-ins. He doesn’t play cash, but I’ve convinced him to have a go. I hope he doesn’t do his bollocks. He is an NLHE man.

He tries to qualify for the Main Event but isn’t that fussed if he doesn’t make it. There is enough for him to do here, although he would like to see more noontime tournaments.

I am just here to play poker. The more tournaments there are, the better.

The online satellite route is off limits to Thirwell because he believes the online qualification process is too convoluted. I agree with him. And he nearly missed the PCA event this year. He thought he had sold his restaurant, but the guy backed out at the last minute.

What would Thirwell have done with his time had the man not taken that backward step?

I would have played poker.

Thirwell explained that at 62, the sale of his business would have helped him become a professional, albeit in the retired chilled out sense. But why? What is it about this game that Thirwell loves so much.

It makes me feel alive.

It’s funny, Phil Galfond used those exact words in our interview this week. Thirwell doesn’t know Galfond. He doesn’t read about poker. But he does know that Sergio Garcia competes at the PCA. A golf lover, he has exchanged selfies with the Spaniard in past events.

I couldn’t get near Ronaldo, though.

I don’t think many did, Stephen.

I ask Thirwell how is age plays out for him at the tables. As he tells me how he uses it to his advantage, by playing up to the old man fish persona, the Adonis in the seat in front of me, turns around and tells us to shut up because he can’t hear his music.

I consider telling him to turn it up.

I consider giving him my Bose Noise Cancellors.

I consider battering him.

I decide to stand on his white trainers when I get the chance.

And with that, Thirwell shuts up, not wanted to rock the plane. We both close our eyes, him thinking of winning the PCA Main Event, and me thinking of the contrast of players that PokerStars has to deal with from the Adonis to the old man who leans on them like a life support machine.