The European adventures of the World Poker Tour (WPT) have ended with the WPT Champions Club inauguration of Chanracy Khun, at the Casino Barcelona in the heart of the Olympic Port. Khun defeated the Frenchman Benjamin Pollak in heads-up action to the take the title just a few short months after his best friend Jonathan Roy did likewise in WPT Montreal. 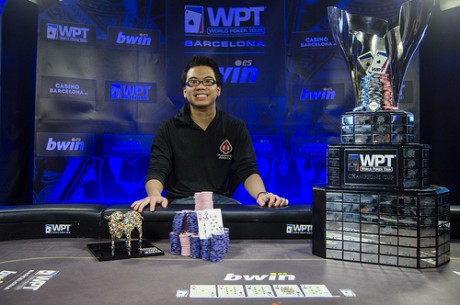 WPT Barcelona attracted a field of 249-players, just one shy of the number that the WPT officials were hoping for. So for the men and women in sharp suits it was a successful tournament. Barcelona is a great venue for a poker tournament and the scheduling was perfect too, as it blended nicely into the European Poker Tour (EPT) final hoorah’s in Berlin and Monte Carlo. I use the past tense because the World Series of Poker (WSOP) decided to host their inaugural Asia-Pacific event overlapping Barcelona, so for some pros their decision on which event to attend was made more difficult than originally perceived.

Despite the pull of WSOP gold bracelets, WPT Barcelona still had a strong number of the players whose names don’t look out of place in the higher echelons of power. Daniel ‘Jungleman’ Cates, Steve O’Dwyer, Faraz Jaka and Toby Lewis, were just a few of the many stars that decided they needed a little fun in the sun. But by the time the top prizes were being awarded the final table was devoid of any of those names. In fact, it was one of the weakest line-ups the WPT had seen, showing how much the deck had helped out the punter in this episode of the WPT Season XI saga.

The final table was only ever going to be a two-horse race. Going through the final table card with a thick red pen it was easy to cross out the fodder. Day 1B and Day 3 chip leader, Sergio Fernandez, whilst exciting was not technically gifted enough to win. He was going to need more of ladies luck, but he was starting the day as one of the short stacks. That meant his presence was always going to be ineffective unless he was able to double up. He was and he didn’t – Fernandez, the virtual bystander, out in sixth place.

Bruno Garcia Cotelo is one of those players who has you rubbing your eyes, wondering how the hell he managed to even get there. You don’t see him play a hand, his stack is never above average and somehow everyone else does his work for him by eliminating themselves. Proof personified that you can fold your way to the final table of a major event. But the final table is a different story. By this time you can only fold your way to elimination and that’s what happened as Cotelo limped out in fifth place.

Najib Hassani Tahiri was the most interesting player at the final table. The Moroccan, who had to be reminded it was his turn to act on several occasions, was your typical ‘play every hand’ poker player. The one you have dominated pre flop but keeps calling your value bets until he hits his miracle card on the river. He found his way to the top table through a hilarious bout of ridiculous plays that would have had the poker purists puking into their pails. It was great to see that nothing had changed once he took his seat in the big one. Tahiri did play every hand, his stack went up and down, but eventually his lack of knowledge and penchant for never folding resulted in a fourth place exit.

The final player to have a red mark slashed across his name was the Portuguese player Antonio Alfaia. A man from the annoying school of doing everything very slowly for no particular reason at all. Some of Alfaia’s decisions during the build up to the final table beggared belief, and he was never going to be a contender when the Tournament Director blew his proverbial whistle. Alfaia must be extremely happy with his third place finish, especially after doubling up three times when an exit looked likely.

So that left only two possible winners before a card was even dealt. The two chip leaders Chanracy Khun and Benjamin Pollak. For Khun it was a new experience. Sure, he had nearly won a seat into the biggest tournament the world has ever seen, when he bubbled a live satellite into the $1 million event in Quebec, Canada. But he had never reached these dizzy heights before. That being said he clearly knew what he was doing, and when you count Jonathan Duhamel and Jonathan Roy as friends then your poker education is also well looked after.

Pollak was a different entity entirely. A journeyman who has moved from France to London so he can continue making a living, grinding the live cash and tournament circuit due to ridiculous taxation rules in his home country. This was Pollak’s third major WPT final table with a fifth and fourth place finish on his Hendon Mob C.V. But this was a different Pollak. The man was cool, calm and collected and had obviously learned plenty from those close shaves with success. If he was ever going to win a WPT title then surely this was his moment?

In the end, the final table went to form with the two favorites duking it out in heads-up action. Going into that final soiree, Khun had eliminated every other player at the table, and in his own words he was ‘running better than ever.’ His fallen axe had resulted in a substantial chip lead, and one that Pollak was never able to overcome. The final hand came when Pollak took a stand with [Kd] [7d] and Khun called holding pocket eights. The flop of [Ad] [9d] [9s] added a bit of drama to proceedings, but it was already written in the stars. Khun repeating the fortunes of Lukas Berglund, one year earlier, when he also eliminated every single player at the table to be crowned WPT Barcelona champion. A piece of gold that now sits on top of the bonce of one Chanracy Khun.