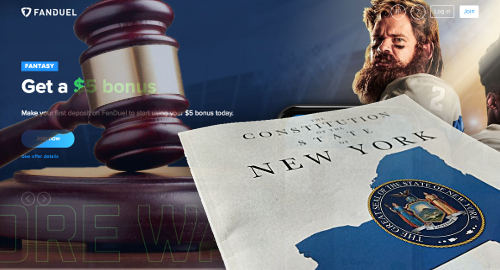 A New York judge has ruled that daily fantasy sports (DFS) is a form of gambling, casting doubt on the continued operation of companies like DraftKings and FanDuel in the state.

On Monday, Albany County Supreme Court acting justice Gerald Connolly sided with the plaintiffs in a suit challenging state legislators’ 2016 decision to authorize DFS by defining it as a game of skill. That designation spared legislators from having to hold a statewide referendum on amending the constitution to permit a new form of gambling.

The plaintiffs – a collection of anti-gambling campaigners, including Stop Predatory Gambling – filed a legal challenge shortly after that 2016 legislation was approved. The state attempted to have the suit tossed but Connolly ruled that the challenge had merit.

In Monday’s ruling, Connolly declared that the plaintiffs had conclusively demonstrated that, while winning a DFS contest requires a certain amount of skill, it also requires just enough luck to fall within the state’s definition of gambling. As such, state legislators lacked the authority to approve their constitutional sleight-of-hand.

However, Connolly complicated the issue by agreeing that the legislators did have the authority to remove DFS from the state’s definition of illegal gambling.

Given the state’s likely intent to appeal Monday’s ruling, New York’s DFS players probably won’t see any immediate interruption to their online play. Such an appeal could take years to wind its way through the backlog of case on the state dockets, and the state could seek a stay of the ruling while the appeal was pending, so the status quo will likely prevail for the time being.

DFS has had a rough ride in New York, where the state attorney general sued DraftKings and FanDuel for “false and deceptive” marketing claims the year before the state approved the activity. The two companies paid $6m apiece to resolve those suits shortly after the state approved its DFS legislation.