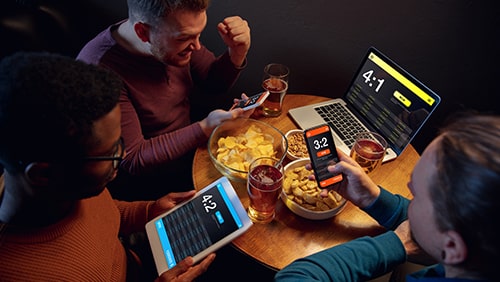 After finally admitting that mobile sports gambling might have a legitimate place in New York, Governor Andrew Cuomo laid out his idea of how things should be handled. However, he’s not the only one, and two lawmakers who have been pushing for the governor to see the light for years are presenting their own guidelines. Now, it will come down to who is more stubborn, and no one should discount the governor’s determination.

Senator Joseph Addabbo and Assemblyman Gary Pretlow filed bills in their respective chambers last week to welcome mobile sportsbooks to the Empire State. Senate Bill 1183 (SB 1183) and Assembly Bill 1257 (A1257) are relatively identical, but are not exactly what Cuomo wants to see. That could prove to be a stumbling block, given the governor’s track record of standing his ground to get his own way.

The bills would alter New York’s Racing, Parimutuel Wagering and Breeding Law to give casinos the authorization to launch mobile sportsbooks. Commercial and tribal casinos would be allowed to get in on the action, while in-state sports stadiums and off-track betting facilities would only be allowed to have mobile sports gambling if they become an affiliate of one of the licensed casinos and install a casino-operated gambling kiosk. Both of the bills have already been presented to the lawmakers’ respective chambers.

The license to operate a sportsbook would run $12 million, which would include the ability to offer two skins. With seven casinos in the state right now – four commercial in upstate New York and three tribal venues – that means there could be as many as 14 mobile sports gambling platforms. These would pay a tax of 12% on their gross revenue, compared to the 8.5% authorized for physical sportsbooks. In addition, official league data would be required if a sportsbook wanted to offer in-play options, and sports leagues would be entitled to take 0.2% of the handle in the form of the heavily-disputed “integrity fee” that has long been contentious among sports gambling operators.

Cuomo doesn’t want casinos to get involved in New York’s online sports gambling scene, should it be allowed to progress, arguing that it doesn’t produce enough revenue for the state. Instead, he wants the state lottery to oversee the activity, which would put more money in New York State’s coffers. This, he believes, would generate as much as $500 million for New York, instead of $50 million that it could earn if casinos were to run the show. Those figures were provided by the state’s budget director, Robert Mujica and are supported by some industry insiders, who believe that New York is sitting on a possible sports gambling gold mine worth as much as $20 billion a year.

Cuomo fought hard to knock down any attempt to introduce mobile sports gambling legislation previously, so it’s unlikely he would get behind any idea that isn’t his own. This is going to make it difficult for online sportsbooks to see acceptance in New York anytime soon, but at least there is finally forward momentum in the process.