Home / Business / New York guv to push for mobile betting; Massachusetts fails to get it done 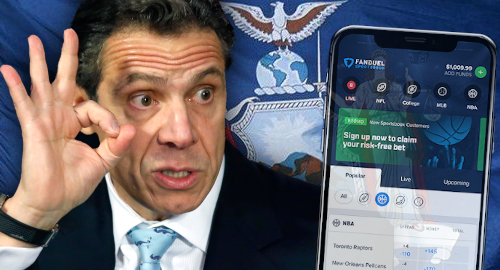 UPDATE: Cuomo said Wednesday that he wants the state to legalize mobile betting “the way the state runs the lottery where the state gets the revenues.” Cuomo said he opposed allowing casinos (and their tech partners) to offer online betting because he’s “not here to make casinos a lot of money. I’m here to raise funds for the state. So we have a different model for sports betting.”

Cuomo’s office later issued a statement clarifying that the New York Gaming Commission would issue a request for proposals “to select and license a sports operator or platform to offer mobile sports wagering … This operator or platform must have a partnership with one of the existing licensed commercial casinos.” The original article appears below.

New York sports bettors are rejoicing as their governor finally appears to be on board with mobile wagering, while Massachusetts bettors are lamenting their elected reps failing to achieve betting consensus.

Late Tuesday, the New York Daily News reported that Gov. Andrew Cuomo would make a pitch for legalizing mobile sports betting when he delivers his annual State of the State address next week. Cuomo issued a statement saying legal online betting would “keep millions of dollars in tax revenue here at home” and help the state recover from pandemic-related economic carnage.

New York legalized betting in 2019 but confined it to in-person wagering at four upstate commercial casinos and their tribal counterparts. Returns to date have been underwhelming, partly due to the distance between those casinos and the state’s major population centers.

Cuomo, who’d long opposed mobile betting, signalled his change of heart shortly before Christmas, publicly musing about ways New York might offset reductions in its tax revenue following lengthy pandemic shutdowns. Cuomo said this week that he aimed to stop New York bettors from crossing over into New Jersey, where mobile betting is thriving (in part due to those New York bettors).

Cuomo’s betting plan will require online sportsbooks to partner with a local land-based gaming operator but most of America’s major sportsbooks have already struck land-based deals in anticipation of Cuomo finally seeing the light.

Cuomo previously expressed doubt that mobile wagering could proceed without amending the state’s constitution, and doubts on this score could produce legal challenges that delay implementation of mobile wagering.

On Wednesday, gaming attorney Daniel Wallach pointed out that a 1984 New York State Attorney General opinion held that allowing the New York Lottery “to conduct a game in which bets are placed on the outcome of pro sports events would require an amendment to the State Constitution in order to be implemented.”

MASSACHUSETTS BETTING PUSH COMES UP SHORT … AGAIN
Meanwhile, over the border in Massachusetts, legislators opted against including sports betting legalization in their economic development bill, which was approved late Tuesday night on the final day of the legislative session.

Last summer, the Massachusetts House of Representatives approved a wagering bill but the Senate opted to defer the matter. As ever, the sticking point proved to be which stakeholders would be authorized to offer betting. The state’s three casinos pushed to exclude online-only operators, with a possible carveout for Boston-based DraftKings.

A new two-year legislative session commenced on Wednesday, and while stakeholder bickering will dominate the discussion, sports betting appears likely to eventually pass sometime in 2021.