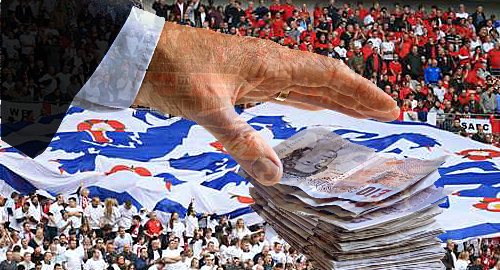 The UK betting industry is giving a two-finger salute to the Football Association’s demand for a cut of betting revenue.

This week, FA CEO Martin Glenn gave an interview to the Telegraph, in which he revealed that his group would seek a “fair return on football gambling” from betting operators. Glenn estimated that this ‘fair’ exchange could be worth tens of millions of pounds on an annual basis, with the funds going toward grassroots football development.

Glenn claimed the cash-grab was “definitely worthy of consideration,” given that betting firms “use our intellectual property.” The FA’s interest in a betting levy was first mentioned over a year ago, around the time the FA decided betting was too filthy a business with which to be publicly associated.

Glenn’s sudden need for betting industry cash was sparked by the failure of the plan to sell Wembley Stadium to Fulham FC owner Shahid Khan for £600m. With the FA’s share of those sale proceeds having evaporated, the hunt is on for some sucker to take the fall.

Gillian Wilmot, chair of the Senet Group betting industry association, called Glenn’s proposal “quite surprising,” given the “large volumes of revenue” that football already receives from betting in the form of sponsorship, let alone the raised attendance and viewing figures from bettors interested in seeing how their wagers play out.

Wilmot told Press Association Sport that Glenn’s proposal was likely to further establish the links between sport and gambling, something she called “just inappropriate” and “going in the opposite direction of travel to what most reasonable people think is sensible.”

Remote Gambling Association CEO Clive Hawkswood was even more blunt, telling the Telegraph that there was “no basis whatsoever” for the betting industry to hand even more money to “what most people would consider to be an extremely wealthy sport.”

Ironically, the betting industry found an ally (of sorts) in the Gambling With Lives campaign, which told the BBC that if any new money is to be raised off the betting industry, it shouldn’t be funneled back into football. Instead, “the priority must be to fund research and education to prevent suicides caused by gambling.”

The UK already forces its bookies to kick back 10% of their betting revenue to the horseracing industry, and the Labour party has previously proposed extending this kickback scheme to all sports. Stateside, the pro leagues continue to wage their (so far unsuccessful) pursuit of a cut of betting proceeds.

In 2014, the concept of a continent-wide sports betting rights program was discussed at the European Sports Forum in Milan, with some legal eagles arguing that such a right would contravene European Union rules against restriction of trade.