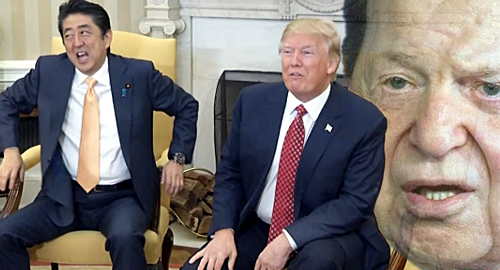 On Wednesday, ProPublica published a lengthy profile on the political activities of Sheldon Adelson, founder and boss of the Sands casino empire. Adelson has long been noted as a Republican party sugar daddy, but the quid pro quo of his outsized financial donations has apparently take on a more tangible form since Trump’s 2016 election victory.

In February 2017, Abe was in Washington for his first official post-election visit with Trump. Adelson was also in town, and held his own meeting with Abe to promote Sands’ interest in obtaining a Japanese casino license. Later that weekend during a dinner at Trump’s Mar-a-Lago golf course in Florida, Trump reportedly told Abe that he should ‘strongly consider’ Sands’ casino bid.

According to two ProPublica sources who were briefed on the meeting, Abe’s diplomatic aides were “a little incredulous” that Trump had raised a major donor’s personal business interests “out of the blue” and in such a “brazen” manner. Abe reportedly “didn’t really respond and said thank you for the information.”

Two months later, in the analyst call for Sands’ Q1 2017 results, Adelson claimed Japan’s government “may allow us to have an interest in more than one integrated resort.” Adelson further claimed that Sands had been told that it was “in the pole position in more than one location” in Japan.

Sands spokesperson Ron Reese told ProPublica that Sands had the inside edge in Japan due to its “significant Asian operating experience” and suggestions that the company was “favored for some other reason is not based on the reality of the process in Japan or the integrity of the officials involved in it.”

Following Abe’s dinner with Trump, Japanese media reported that Abe had instructed an aide to jot down Sands’ name as well as a second US casino operator recommended by Trump that various sources have reported as either MGM Resorts or Wynn Resorts.

Trump’s mean-girl penchant for holding a grudge against anyone who fails to show the appropriate level of deference would seem to rule out his lobbying on behalf of MGM. A few months ahead of the 2016 election, MGM CEO Jim Murren publicly declared his support for Trump’s opponent Hillary Clinton, while rubbishing Trump’s business acumen and temperament.

While Trump and former Wynn boss Steve Wynn had their differences in the past, Steve had served as finance chair of the Republican National Committee until this January, when his allegations of sexual impropriety forced him to resign his post.