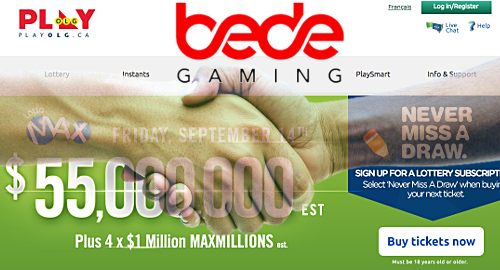 On Thursday, the Ontario Lottery & Gaming Corporation (OLG) announced that its competitive procurement process had identified the UK-based Bede as the best candidate to build OLG’s “new enterprise-wide digital foundation.”

OLG began its search for a new digital platform provider nearly two years ago, and it doesn’t expect the new player platform to be in operation until early 2020. Nonetheless, OLG’s chief operating officer Greg McKenzie said the monopoly was “looking forward to developing our relationship with Bede as OLG continues its digital transformation.”

Bede co-founder Michael Brady celebrated the “landmark” deal with OLG, which marks his company’s first North American deal. Brady called the deal “a huge recognition of the strength of our offering” and he predicted “a long and successful relationship with one of the most respected names in the worldwide lottery sector.”

OLG’s efforts at modernization haven’t always been smooth, as evidenced by the stillborn proposal to privatize management of its mainstay lottery operations, which was ultimately scrapped after OLG realized it didn’t make fiscal sense.

OLG launched its PlayOLG gambling site in January 2015 but the site has so far underwhelmed Ontario’s gamblers, reported revenue of only C$58.4m (US$45m) in fiscal 2016-17. That sum was 18.7% higher than the previous year’s total but pales in comparison to the sites operated by OLG’s provincial counterparts in British Columbia and Quebec.

Prior to PlayOLG’s launch, OLG had expressed interest in Quebec’s plan to force local internet service provider to block the domains of international online gambling competitors. However, legislators never followed through on OLG’s sentiments, and a Quebec court recently struck down the domain-blocking plan as unconstitutional protectionism.