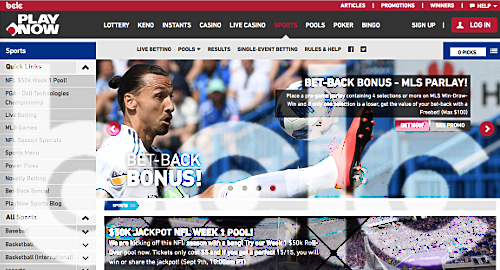 British Columbia’s government-owned gambling monopoly earned record income in its most recent fiscal year, thanks in part to an equally record-breaking online performance.

BCLC’s casino and community gaming division – 15 casinos, 18 community centers, two racecourse casinos and five bingo halls – reported record revenue of C$1.95b. The revenue gain was largely due to slots rising nearly 7% to C$1.37b, while table games were up less than 1% to C$492.7m.

Lottery revenue was also essentially flat at C$1.13b, despite another record performance by the Scratch & Win category. The flat result was blamed on a dearth of mega-jackpots in national lottery games.

As for BCLC’s online gambling site PlayNow.com, revenue jumped 14.5% to C$180.6m, thanks in part to the launch of live dealer casino games in late January courtesy of Evolution Gaming. A focus on mobile player experiences, including a wider variety of slots titles and parlay sports betting options, also helped goose the numbers.

BCLC doesn’t break out net income figures for its eGaming division, but capital spending on PlayNow hit C$4.1m in the most recent year, up from just C$1.6m in 2016-17.

By way of comparison, Quebec’s online gambling monopoly reported revenue of C$118m in its most recent fiscal year, while Ontario’s gambling site – which launched much later than the other two provinces – generated just C$58.4m in 2016-17, the last year for which figures are available.

Despite PlayNow’s revenue surge, the site may have already peaked in terms of its available audience. The 2016-17 report celebrated PlayNow’s registered customer base topping 370k, and the 2017-18 report contains the identical customer figure. Access to PlayNow is restricted to British Columbia residents, of which there are less than 5m.

To jumpstart these stagnant numbers, BCLC introduced a pilot program last November called Web Cash, which consists of C$25 vouchers for deposits on PlayNow that are distributed to customers at 33 of BCLC’s retail gaming locations. BCLC is considering expanding the program in the hopes of encouraging land-based gamblers to check out the digital option once they leave the venue.