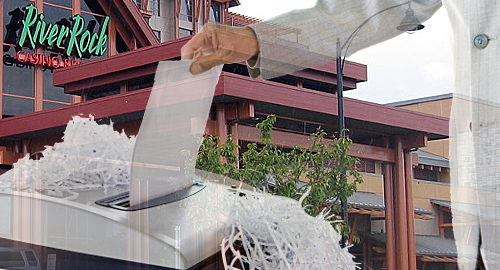 According to Global, Kroeker subsequently informed GCG execs of BCLC investigators’ allegations that River Rock staff were shredding paper records of financial transactions that were just under the C$10k reporting threshold of the Financial Transactions and Reports Analysis Center (FINTRAC).

BCLC apparently suspected that the shredding took place following a customer deposit of just under C$10k, after which the customer would make another deposit of a similar amount, thereby skirting FINTRAC’s requirement to report cumulative transactions by any single customer that exceeded the C$10k threshold.

The meeting reportedly also addressed BCLC investigators’ concerns that staff in River Rock’s high-limit gaming room were too close to the VIP gamblers. A former River Rock staffer claimed the casino’s dealers and supervisors “never cared or questioned a high-limit player’s source of income or where they get playing chips, as long as they tipped a big amount.”

In a statement to Global, GCG said it “undertakes to be in compliance with all regulations” and insisted that neither GCG nor River Rock have been “the subject of any enforcement activity regarding our practices or track record for filing required reports.”

BC’s casino scandal began one year ago, when the new provincial government discovered that the previous administration had been hiding the scale of the shenanigans at local casinos. The province has since implemented new money laundering rules but an independent investigator’s report issued in June suggested a truly independent gambling regulator was needed to resolve BC’s shortcomings.

Meanwhile, GCG has found itself under an ever more powerful microscope, including a report in July seeking answers on the company’s years-ago investment in an Asian casino cruise operation that had links to individuals suspected of triad connections.