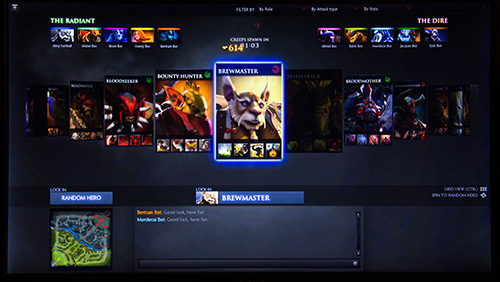 Dota 2 developer, Valve, has warned The International participants to severe ties with gambling companies and websites through fear of exposing their brand to children, but Lee Davy feels the move is a short-sighted one.

Yesterday, my daughter turned me into a Cowardly Lion.

She has this magic wand thing. The type that has a sound so irritating it makes you want to put your head into a bucket full of dengue fever-ridden mosquitoes every time she uses it.

Each time she presses that nuclear button I hear the bells and whistles of a Las Vegas casino. Our children love these sounds, and as they age, and start wanting to use that magic wand to turn me into dust, they will also grow to love a flutter or two.

So how do we prepare for that?

It’s a question facing video game developers as titles, created to entertain children, are transforming into professional sports captivating millions of young men, women and children all over this not so peaceful planet of ours.

Rewind 12-months, and League of Legends (LOL) developer, Riot Games, issued a warning to the top Swedish esports team, Ninjas in Pyjamas (NiP) to drop their relationship with the gambling outfit Betway, or they would cut them from their lucrative tournaments.

Now, press the fast-forward button, and you arrive right here, right now. I’m trying to figure out how to take a dump without being bitten by a flesh-eating monster; the cleaner sweeps the leaves off the streets before they have time to get acquainted, and Valve have done a Riot Games suggesting that it may be a good idea for Dota 2 teams to drop their sponsorship deals with gambling companies and websites.

I wanted his opinion on something.

Now, Lex is always free for a quote or two; you can bet your bottom Rupee on that.

“Sorry, dude, I am in the International.”

That’s how prestigious this tournament is.

As I type, and eat bananas that are smaller than my middle finger, 16 teams are currently locking horns in Dota 2’s The International. It’s THE tournament in esports.

Here are the top four payouts.

18 teams receive some form of prize.

That’s a lot of money.

In poker, Justin Bonomo won the most significant prize of the year when he took down the $1m buy-in One Drop for $10m, but he had to pay $1m to sit down and play. These doctors and nurses get paid to play, and they could end up, as a team, winning more than the hottest poker player in history.

It’s time to educate our kids.

It’s Time to Educate Our Kids

In January, I took my 17-year-old son to the Bahamas for the PokerStars Caribbean Adventure (PCA). My boy lives with his Mum, so I don’t get the opportunity to impart fatherly advice that often. I’m rustier than the Tin Man my daughter keeps turning me into.

It was the first time he had been inside a casino. I didn’t take him there. We had to walk through it en route to the poker area. As we walked, the bells and whistles of the magic wand must have leapt out of some cupboard hidden deep in his subconscious.

He kept asking me questions.

“Why don’t you play anymore?” He asked.

I said, “Look, Jude, if you end up in a casino on a Saturday night, and decide to spend money you can afford to lose gambling with your mates, then you’ll have a lot of fun.”

And that was my gambling lesson.

It was shorter than the birds and the bees discussion, but he already had all the answers during that dad on boy chat.

According to numerous press reports, in a recent pow-wow between the top Dota 2 teams at the International, and Valve, the game developer suggested that it would be in their best interest to avoid sponsorship deals with gambling companies and websites.

I think this is a mistake, and I believe The International host, Paul “Redeye’ Chaloner may agree with me. Never before in my lifetime has a sport emerged from nowhere with the potential to be the most absorbing in the world.

Ever since cave dwellers bet a few sheep knuckles on who could bring down the mammoth, human beings have been gambling, and we will be doing so on our way to Mars in Elon Musk’s Space X rocket.

Trying to disassociate brand image from gambling, when your game is the beating heart of that very thing, is not just folly, it’s irresponsible. What Valve, Riot Games and anyone else who has created a monster should do is to focus 100% of their power on building educational tools for our children that are more advanced than my two paragraph training session on roulette.

These teams need this sponsorship revenue.

Not everyone is capable of winning The International.

In many ways, the professional esports scene resembles the distribution of wealth with a privileged few owning most of it, and everyone else making do with fried ‘everything’.

Yes, match-fixing is a problem.

But it’s a problem in football, tennis, and tiddlywinks.

Stop waving your magic wand in front of our children. You won’t blind them to the world of gambling. Instead, harness that power to create the greatest gambling educational program our children have ever seen.

I can’t even get my kids to eat broccoli.

What hope do you have?